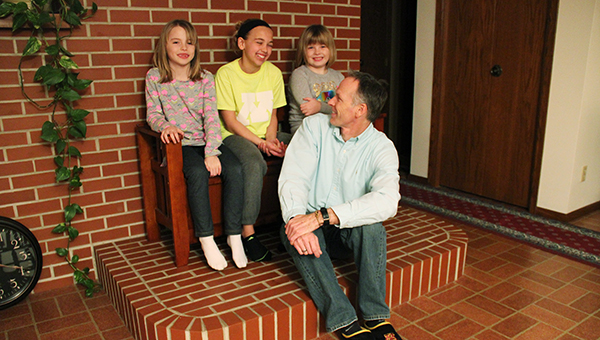 Albert Lea father Al Mullenbach looks at his three daughters, Jordan, 7, Jada, 9, Whitney, 8. Like many families who have been in the Ronald McDonald House, they save pop tabs to raise funds for the Rochester charity. –Tim Engstrom

Will Schafer Mullenbach was born July 8, 2003, at the hospital in Albert Lea. He was a blue baby and doctors immediately diagnosed him as having transposition of the great arteries. He was flown by helicopter to St. Marys Hospital in Rochester.

The boy’s parents, Al Mullenbach and Michelle Schafer, spent the next 77 days living in the Med City. Fortunately, after the first few days, they were able to move into the Ronald McDonald House. To this day, their children save their aluminum pop tabs.

Walking down the hallways in schools in and around Albert Lea or at preschools such as The Children’s Center, people spot a poster about pop tabs. It’s a well-known fundraiser for the Ronald McDonald House.

People collect flip-top tabs from aluminum cans and save the proceeds for the Ronald McDonald House. They take containers of tabs to the house itself, if they reside in Olmsted County, but where do they take them if they live in Freeborn County? 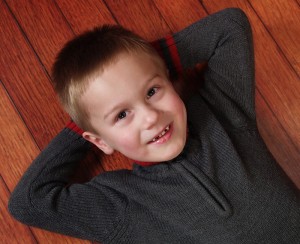 Tristan Register might have been to the Rochester many times for medical care, but he seems like any other happy 4-year-old boy these days. –Submitted

“Thousands of young people and families participate every year,” she said. “Past guest families often host large pop tab drives back home to raise awareness of our mission.”

The Ronald McDonald House in Rochester is at 850 Second St. SW. It is just two blocks from St. Marys Hospital, where infants and children in the region get medical care for serious illnesses. Parents already bear plenty of expenses when raising children, so long hotel stays can add up. And staying in a hotel for days or weeks on end can be rough for siblings of the young ones in the hospital. It is the mission of the Ronald McDonald House to provide community living at no cost to families, though most make a donation of about $15 a night.

It all started in 1979 when four Rochester families sought to provide a home away from home for families with seriously ill children, and in 1980 with community support they formed Northland Children’s Services, a 12-bedroom home at 613 Second St. SW. The place was called the Northland House.

The Northland House became a licensed Ronald McDonald House in 1990, providing a familiar face for children and better recognition in the region, plus a strong tie to McDonald’s Corp. The board sought a new location, and in 1995 moved to the 850 Second St. SW location. It had 24 rooms for guests, and it had living areas, kitchens, laundry, playroom, game room and offices. In 2004, the Ronald McDonald House expanded, adding 18 more guest rooms. Six of them are specifically for long-term stays. There is also a community dining room, and volunteer groups come one or two nights a week to make meals for the families.

Maggie Schoepski is the community development director for the Ronald McDonald House. She said the house is full nearly every night.

“We often have a waiting list of families hoping to get in,” she said.

“Our board and staff are exploring strategies to address this capacity situation,” Schoepski said.

The Ronald McDonald House provides bed linens, towels, cleaning supplies and cooking appliances and utensils. It also offers books, DVDs, toys and video games, mainly for kids. But there is a pinball machine that grown-ups often enjoy, too.

All the rooms are slightly different, and they have a capacity of five. Each room has a queen bed with a twin and a trundle or bunk beds. They each have a bathroom, air conditioning, private phone and a computer that functions as a TV and DVD player.

Albert Leans likely recall seeing billboards in 2010 with the face of a smiling toddler who was promoting chocolate chip cookies that benefited the Ronald McDonald House. It was Tristan Register, son of Chris and Danielle Register.

Tristan was part of the “Cookies for Kids” campaign. Tristan’s photo was on a billboard in Albert Lea and on three more in Rochester, as well as three digital billboards in Rochester, where his picture rotates with other messages. He was also on table tents and tray liners.

Tristan was born three months prematurely in July 2008. It was then that the family got to know firsthand about the Ronald McDonald House in Rochester, which provides a “home away from home” and offers support to families seeking medical care for their children. There are bedrooms, laundry and kitchen facilities to use. Community volunteers prepare meals a couple nights a week.

At birth, Tristan weighed 2 pounds, 6 ounces, and was 14 inches long. After he was born, he was flown from Albert Lea’s maternity ward to the neonatal intensive care unit at St. Marys Hospital in Rochester. He stayed there for 80 days, growing into a 7-pound boy when he was ready for discharge.

But he would be back, and his family would return to the Ronald McDonald House.

One Sunday in October of 2008, he was lethargic. Danielle and her mother, Lee Ellen Sundholm, took him to the Albert Lea Medical Center emergency room, where he stopped breathing. Medical personnel got him breathing again, and he was once again flown to Rochester.

Tristan was diagnosed with late-onset step B and spent another 11 days in the hospital. A bronchoscopy to check his airway on Dec. 19, 2008, revealed a cyst in his airway. Chris and Danielle were given a choice. He could have a tracheotomy or an open airway reconstruction. They chose the reconstruction.

Danielle didn’t come home once to Albert Lea between Dec. 19 and Feb. 5, 2009. Chris continued to work at his job in Fairmont, joining Danielle in Rochester whenever possible. Santa came to the Ronald McDonald House for Christmas, and doctors prepared a Christmas dinner for the families. Tristan ate no food by mouth until June 2009.

As of January 2013, Tristan has been to operating rooms 37 times, but shows no problem with what has become a normal part of his life. The Registers say his health has been a roller coaster, but today Tristian is a “healthy, energetic and loving 4-year-old boy.”

“We will never be able to give back enough to The Ronald McDonald House. They made us feel welcomed and cared for during such a difficult time in our lives. They will forever be in our hearts and our family,” Danielle Register said.

On the Saturday before Christmas, Al Mullenbach and Jenine Kozolek took Whitney, 8, Jordan, 7, and Jada, 9 to the Ronald McDonald House to see a room named for their brother Will.

You see, Will didn’t make it. He died Sept. 23, 2003, from complications during surgery. The child had gone through several surgeries for his heart troubles and each week they thought they would be leaving the next. But after this one, the parents had little choice but to take him off life support.

Meanwhile, the Ronald McDonald House was going through its expansion. The Mullenbach family began a drive to name a room for Will. With the help of small and large donations, including a big check from Minnesota Corrugated Box, the family raised $15,000 for the naming.

The Al and Michelle had spent so much time at the hospital, with the baby, but the Ronald McDonald House urged them to get away from the medical atmosphere and get some rest. Even so, they spent time briefly mornings and evenings, but that was it.

“It still functioned as a home away from home,” Al Mullenbach said.

The staff, Al said, always were nice and friendly, and since then they have met many other locals who have been there.

“It’s amazing. You talk to so many people in the county who have stayed there,” he said.

“I could not imagine my life at that time without their support,” she said, noting family and friends still donate in Will’s memory. “It is so important to continue to donate and help families have that same feeling while they are staying there.”

During the December visit, the three girls sat on a bench next to a painted statue of Ronald McDonald the clown. They liked the game room and understood what happened to Will and how they can help others.

They had saved money they had found in the laundry and other places and placed it in a little bank the shape of a star. They gave their money, about $40, to the Ronald McDonald House.

Whitney said the donation made her happy.

“I liked it because it was helping other people, and that’s really nice,” she said.