Who gets to possess? 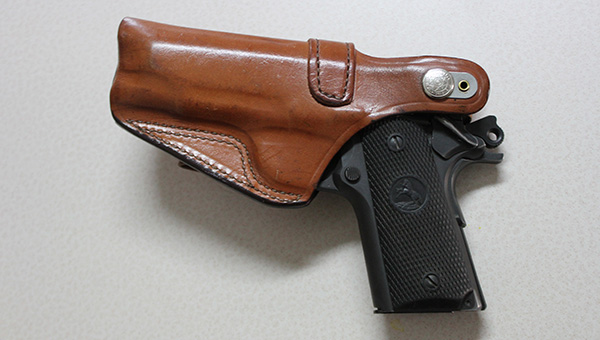 The debate over how Minnesota will construe its laws regarding firearms continues at the state Capitol. — Tim Engstrom/Albert Lea Tribune

ST. PAUL — A bipartisan group of lawmakers on Wednesday announced a bill that aims to toughen penalties for criminals who carry guns.

The rare combination of gun rights groups, public safety officials and Democratic and Republican lawmakers held a news conference to praise a bill they all agree on — legislation designed to keep guns out of the hands of people who shouldn’t have them.

But the measure, a modest gun control bill that emerged from weeks of behind the scenes negotiations, is being criticized for lacking a requirement of universal background checks for most gun purchases. That sets up a showdown between its supporters and proponents of a bill that includes background checks.

State Rep. Debra Hilstrom, DFL-Brooklyn Center, said the bill has 73 co-authors, more than enough to guarantee passage in the House, and also is supported by an equal number of DFL and GOP House members.

The bill would require state agencies and courts to quickly forward information to a national database that lists mentally ill people who are barred by law from owning guns. It also would forbid convicted felons who already cannot possess guns from possessing ammunition.

Another provision would increase penalties for so-called straw purchases, in which people buy guns for others who are legally restricted from owning them. Hennepin County Sheriff Rich Stanek said the Minnesota Sheriffs Association backs the bill.

“The problem we have is with access. Those who are legally prohibited from owning or possessing a gun should never have access to a gun,” Stanek said. “We should be focusing on the access problem and not infringing on the rights of law abiding citizens.”

However, because the new bill does not include universal background checks for gun purchases, a fight over competing measures looms in the Minnesota Legislature.

State Rep. Michael Paymar, DFL-St. Paul, who made background checks the cornerstone of a bill he introduced last week, said he’s disappointed an alternative has now surfaced. Paymar, chair of the House Public Safety Committee, said he won’t hold a hearing on Hilstrom’s bill despite the wide support for it.

Paymar also intends to push for a vote on the background check language despite the lack of support on his committee for the measure.

State Sen. Ron Latz, DFL-Louis Park, who also has been working on a gun control bill, said the Senate Judiciary Committee will vote for background checks. Latz said he’s puzzled why an alternative bill has surfaced.

“All sorts of things are subject to regulation,” Latz said. “A background check is merely, what I would submit, a lawful and appropriate regulation of a product when used as intended will kill someone or something.”

The disagreement over background checks now sets off a firestorm of lobbying on whether they should be included in any gun legislation.

Heather Martens, executive director of the group Protect Minnesota, which advocates for gun control, said she’s disappointed Hilstrom is pushing a bill that doesn’t include background checks. She said polls across the country, including a Star Tribune poll of Minnesotans this week, show a majority support expanding background checks for gun purchases.

“If they pass this, there are still going to be guns flowing to the streets where they endanger our kids,” she said.

But Andrew Rothman, vice president of The Gun Owners Civil Rights Alliance, said the alternative bill is the best option because it has wide bipartisan support from legislators across Minnesota. He said the bill focuses on people who shouldn’t have guns while ensuring constitutional protections for others.

“This is picking the good parts out, going after the criminals and making sure that our mental health data and our commitment data without going after the law abiding and infringing on their constitutional rights,” he said.

Gov. Mark Dayton said Wednesday that he supports expanded background checks in any gun legislation but declined to say whether he would veto the bill if the language isn’t included in the final legislation.