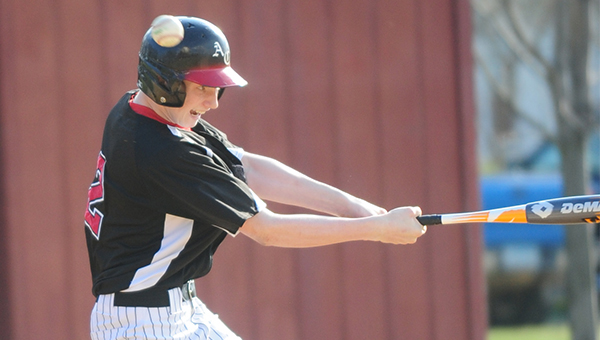 Alden-Conger’s Jordan Bute fouls away a pitch Monday against Loyola Catholic. The Knights fell 16-0 in their home opener to the Crusaders. — Micah Bader/Albert Lea Tribune 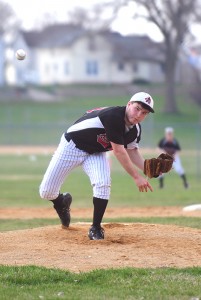 The Knights stayed with the Crusaders early. Starting pitcher Jordan Johnson didn’t allow any runs in the first inning.

In the second inning, Loyola Catholic scored the game’s first runs to take a 3-0 lead.

In the third, the Crusaders took the air out the Knights’ sails with six runs to extend their lead to nine runs.

However, third-year head coach Sam Hintz looked on the bright side as he talked to his players after the game.

“Our pitching was pretty good,” he said. “We just gave up too many walks and lost some passed balls in some terrible spots.

Like most other teams in southern Minnesota, the Knights were kept off their field due to moisture.

“It was finally ready to play on yesterday,” Hintz said. “It’s so low that it’s really hard to get it dry.”

The Knights’ first seven games were postponed or canceled.

Three sophomores and three freshman are starting on defense for Alden-Conger. Near the end of the game, the Knights were able to give their bullpen some game-day experience as well.

“Our guys have pretty good skill for how young they are,” Hintz said.

Loyola Catholic was chosen as a front-runner in the Valley Conference by Hintz during the preseason. Last year, the Crusaders competed in the Gopher Conference, where they finished 16-6 overall and 10-2 in the conference.

Alden-Conger will attempt to build on last season’s 3-12 overall record.

The Knights will look to get back on track at Lake Crystal-Wellcome Memorial at 5 p.m. today.