Don J. Prafke, 80, formerly of the Kiester and Walters area, died Saturday, April 20, 2013, at Pheasant’s Ridge Assisted Living in St. Peter. A memorial service will be at 11 a.m. Friday at Our Savior’s Lutheran Church in Kiester. Visitation will be from 5 to 7 p.m. Thursday at Bruss-Heitner Funeral Home in Wells, and will continue one hour prior to the service at the church on Friday. Military honors will be accorded by the Kiester American Legion post. The Rev. Katie Pals will officiate and interment will be in Fairview Memorial Cemetery in Fairmont at a later date. Please see www.brussheitner.com to leave online condolences. Bruss-Heitner Funeral Home in Wells is in charge of arrangements. 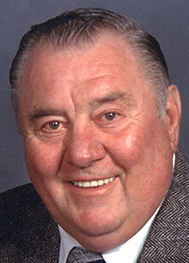 Don was born on Nov. 28, 1932, the son of William and Charlotte Prafke in rural Granada (Martin County). He graduated from Granada High School, served in the U.S. Army and attended college at Mankato State College. Don was a very talented baseball player and spent time playing baseball in the Army as well as for many town teams. Owning his own plumbing and heating business for many years was a source of pride for him as was working as a rural mail carrier in the Wells and Walters areas. He was a dedicated member of the American Legion, the 40&8ers, Our Savior’s Lutheran Church and a number of other groups and organizations.

Much of Don’s adult life was spent in the Kiester and Walters area. He moved to St. Peter in the fall of 2009 where he lived at Pheasant’s Ridge Assisted Living Facility. During his time at Pheasant’s Ridge, he enjoyed visits from his grandsons and was blessed to have wonderful care until his passing.

Don always enjoyed a good medium steak, Jim Beam and Coke, teaching baseball, Pepsi and telling jokes that he had written on the back of index cards. Don was also known as a very good dancer and the State Line Star and Golden Bubble Ballroom were two of his favorite spots.

Don is survived by his son, Todd (wife Ytive) Prafke; four grandsons, Aleksandr, Payton, Connor and Mikinley Prafke, all of St. Peter. He is also survived by his second wife, Zella, of Kiester; sister, Jolene (husband Warner) Hanstad of Minneapolis and their children.

He is preceded in death by his parents and many family and friends.

Memorials are preferred to the American Legion Post 494, Kiester and Our Savior’s Lutheran Church of Kiester.