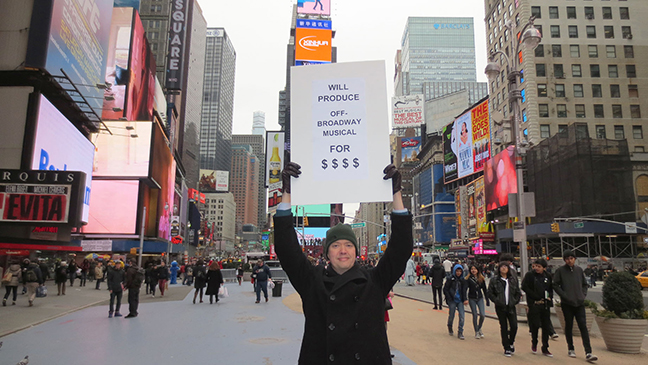 Phil Darg has to raise about $40,000 to produce his musical in an off-Broadway venue in July. Earlier this year, Darg won a competition for the opportunity through the New York Musical Theatre Festival. Darg’s parents, Lloyd and Carol (Lindell) Darg are both graduates of Albert Lea High School. –Photo courtesy Mankato Free Press

The good news: Minnesota State University graduate and hobby playwright Phil Darg has been selected by the New York Musical Theatre Festival to produce “Sasquatched! The Musical” in an off-Broadway venue in New York City.

The bad news: The cost of production is in the neighborhood of $40,000.

“We have one of the biggest shows in the festival,” said Darg, adding that $40,000 is a bargain for producing an off-Broadway show. “But even so, our budget is small compared to others. We’re at a disadvantage in this regard, but we’re hoping that some local support can help to bridge the gap.”

Darg is the son of Lloyd and Carol (Lindell) Darg, both graduates of Albert Lea High School.

Darg was notified earlier this year that his musical was one of 10 selected by the NYMTF’s panel of nine judges — all but one of whom has won or been nominated for a Grammy, Tony or OBIE award.

Each of the 200 submissions was judged blindly with the final 10 earning a chance to participate in NYMTF’s Next Link program. The mission of the program is to “empower emerging musical theatre writing teams … by providing the training and relationships needed to help them move their musicals from readings to fully-realized productions and to advance their careers by maximizing the exposure they receive in the festival.”

Each playwright is given the chance to attend a weekend symposium that includes seminars led by industry professionals on fundraising, marketing, industry outreach and self-producing. Participants are also introduced to potential collaborators, supporters and producers, and receive dramaturgical support from professional literary managers and dramaturgs.

Finally, each Next Link show receives financial support in the form of a $5,000 subsidy toward its production. The festival will be held July 8-28.

For Darg, the selection into the festival represents both an extreme honor and an extreme surprise.

“I’ve been calling it a Cinder-fella story,” said the Maple Grove resident who has written a few stage works in the past but doesn’t consider himself a working professional. “It really is something that came out of nowhere.”

Darg began writing the musical in January of 2012. Within 30 days, he completed his musical about a calm, rational and dignified sasquatch who gets lost in a national park and is befriended by a young boy. Together, they encounter a melange of quirky individuals, including a hysterical TV crew that is investigating Bigfoot sightings.

Darg, who is also a musician whose compositions have been heard on MTV and the History Channel, then began crafting the production’s 14 musical numbers.

“Certainly there is comedy,” Darg said. “It’s just funny to have a talking sasquatch. At the same time, however, there is some social commentary about this being that’s so misunderstood.”

The two-act play runs for about 100 minutes, and Darg said much of the production budget will pay for actor salaries, musicians and production personnel.

Since its inception in 2004, the New York Musical Theatre Festival has premiered more than 320 new musicals — more than 86 of which have gone on to award-winning productions in New York, in regional theaters in almost every state, and in 20 countries worldwide.

NYMTF alum “Next to Normal” won three 2009 Tony Awards and the 2010 Pulitzer Prize for Drama during its Broadway run. Other alumni include the long-running hit “Altar Boyz” as well as “Fat Camp,” “The Great American Trailer Park Musical,” “In Transit,” “Rooms,” “The Shaggs,” “The Other Josh Cohen” and ”Yank!”

For more information about “Sasquatched!! The Musical,” or to donate to the effort, visit www.sasquatched.com.