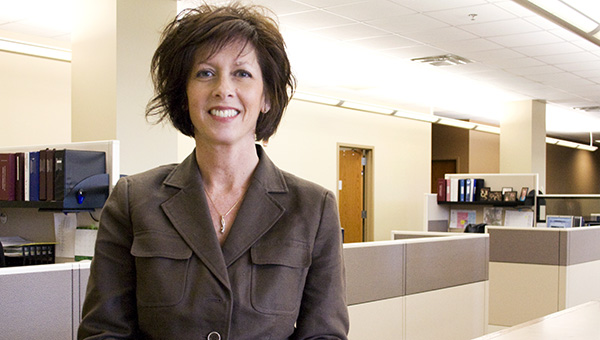 Appointed as auditor-treasurer in November and beginning in January, Martinson said she feels fortunate to have been given the opportunity to complete retired Auditor-Treasurer Dennis Distad’s term.

“I walk into this building a lot of mornings, and I’m just happy to come here,” she said. “I feel like a lucky person.”

Though she has been in her new position for only a few months, Martinson is no stranger to Freeborn County government. She has worked for the county since 1990.

In that year, she said, she came in to help stuff tax statements into envelopes that needed to be mailed.

“I’ve been here ever since,” she said.

She has filled a handful of other county positions before starting in the Auditor-Treasurer’s Office.

In 1992, she worked as a part-time elections clerk. In 1995 she worked as a billing clerk in the Public Health Department, and in 1999 she began full-time with the Auditor-Treasurer’s Office.

There, she first worked primarily with tax collections, and then in 2004, she started in the accounting specialist senior position, which turned into chief deputy auditor-treasurer. In that position, she worked side by side with Distad until his recent retirement.

“He was an excellent person to learn from,” Martinson said. “He gave me a lot of opportunity and background that makes me feel a lot more comfortable.”

Martinson said being the Freeborn County auditor-treasurer has given her a variety of responsibilities. She is a tax collector, the election administrator and the deputy registrar for the License Center, among others.

She said she enjoys helping people, noting that this aspect of her job makes things worthwhile.

Though there have been challenges — two of her four employees are brand new — she said she is pleased with her job and her staff.

She said she has appreciated the support she has received from department heads, staff and the Freeborn County Board of Commissioners since starting.

Martinson, who was born in Iowa, moved to Minnesota with her family as a young child. She has lived in the Glenville area most of her life.

In 1978, she married her husband, Brad, who owns and operates Glenville Plumbing & Heating. The couple has two children.

Looking ahead toward the future, Martinson said her position will be back on the ballot in 2014.

“It’s very natural for me to run, and that’s what I plan to do,” she said.

The Auditor-Treasurer’s Office can be contacted by dialing 377-5121.

Interesting fact: Martinson recently returned from a trip to San Francisco, her second trip there this year.