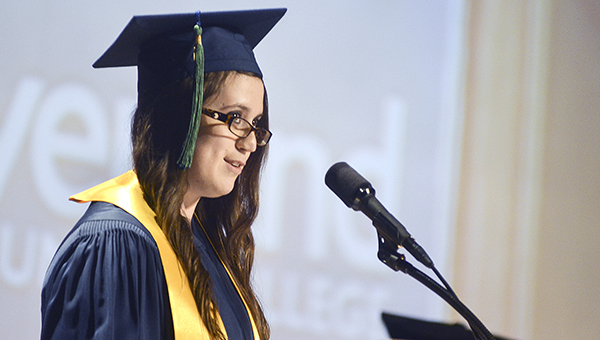 In front of hundreds of listeners, Austin resident Joann Ramaker told the story of how marrying her husband and having a child had renewed her dedication toward higher education.

“I pulled through and I realized I needed to do what was best for me and my family,” the graduation speaker said. 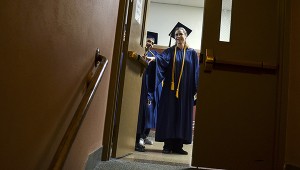 A pair of Riverland graduates peak in through a door during the 2013 commencement Friday night in Knowlton Auditorium. — Eric Johnson/Albert Lea Tribune

Ramaker, who had just earned her administrative assistant and office specialist diplomas and customer relations and computer application certificates, was among the 250 Riverland Community College students who packed into Knowlton Auditorium Friday night to be recognized for their accomplishments.

As “Pomp and Circumstance” played and students clad in blue robes filed into the auditorium, cheers and shouts erupted from particularly enthusiastic families who caught sight of their son, daughter or sibling.

For Diane Groth, an Albert Lea resident who has been a nurse for years, the ceremony meant achieving her associate degree in professional nursing.

“It was a lot of work, but it obviously paid off,” she said.

Her daughter, Clarissa Groth, shared the occasion, as she graduated with an associate in arts degree at the same time.

Sam Scheffler of Faribault, received his diploma as a wind turbine technician. He thought back on his years at Riverland fondly as he watched the last of his peers pick up their caps and gowns. 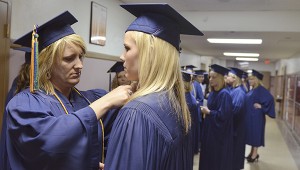 “It was a fun time,” Scheffler said. “Learned a lot and made a lot of friends.”

The ceremony’s other student speaker, Austin resident Karem Salas Ramirez, told her peers their success at Riverland was a sign they were capable of accomplishing a lot.

“Now I can be more confident that changing the world is possible,” she said.

In total, 738 students graduated from Riverland’s fall, spring and summer semesters this year. A little less than half of those students received an associate degree, and some of them will begin their career while others will pursue a degree at a four-year college or university. The rest, about 54 percent, have earned degrees, certificates and diplomas from various career programs, and are ready to enter the workforce.

Chemistry instructor Catherine Haslag spoke on behalf of the faculty, noting how proud she was to be able to help the students get their education, something that cannot be taken away from them.

“It is your responsibility to use your education and skills to make the world better,” she said. 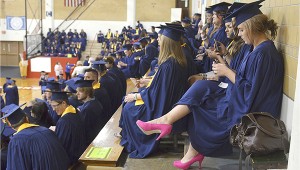 Before students rose to accept their diplomas, Terry Dilley was awarded an honorary doctoral degree. The instructor, hired 48 years ago this month, said he was delighted to have had the chance to teach more than 20 different subjects in his time with Riverland.

“I have worked with intelligent and learned colleagues … who also have become my friends,” he said.

The right to owning a firearm is not a…