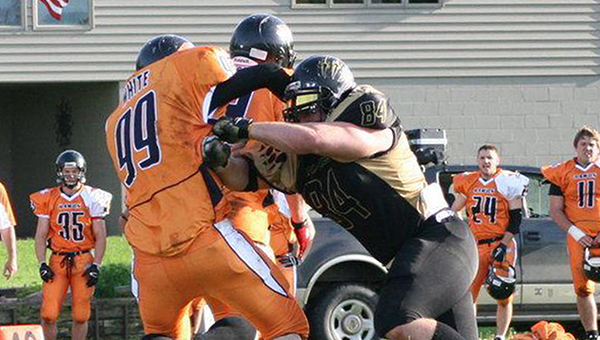 Matt Mirowski, the new president of the Albert Lea Grizzlies football team, blocks for his teammates last season. Mirowski played college football at Buena Vista University and has been playing for the Grizzlies for three years. — Submitted

After playing prep and college football, Matt Mirowski thought his gridiron days were over.

However, the decorated Mason City High School graduate found new life on the football field with the Albert Lea Grizzlies.

“After I hung it up in college, I pretty much leveled with myself that that was the last time I’d put pads on,” Mirowski said. “You don’t get many second chances to play like this.”

Along with providing leadership in his third season on the Grizzlies’ offensive line, Mirowski has some new responsibilities this season: He’s the new team president.

“I asked the board of directors if any of them were interested in stepping up and running the team,” former team president Craig Schmidt said. “He stepped up without hesitation.”

Schmidt had high praise for Mirowski’s work with the Grizzlies.

“He has been instrumental in the development of the team this year,” he said. “He’s an inspiration for many of the guys on the team because of his tireless work ethic and dedication.”

In Mirowski’s high school days, he played for the Mason City Mohawks. He earned honorable mention All-Conference accolades in 1998, second team All-Conference in 1999, and he was one of two student athletes who were awarded the Army National Scholar Athlete award in 2000, he said.

In addition, Mirowski was selected to the Iowa All-Star team, and he was invited to play in the International Sports Specialists’ Down Under Bowl in Australia.

According to the Down Under Bowl’s official website, several notable NFL players also have competed in the event, including former Green Bay Packers running back Ahman Green and former Denver Broncos quarterback Jake Plumber.

Mirowski was given the opportunity to play college football at Buena Vista University at the Storm Lake, Iowa, campus. He later enrolled at Waldorf College in Forest City, Iowa. Then, he earned his graduate degree at the University of Wyoming in Laramie.

Mirowski said he found out about the Grizzlies through retired offensive lineman Steve Sawin. When he went to the first practice, he was sold.

“I’ve never been on a team before in my life — and I’ve been part of quite a few organizations — that has such a family type of atmosphere,” Mirowski said. “It doesn’t matter what your role is on the team. We’re all brothers.

“There’s no cliques or groups of guys who think they’re better than everybody else.”

The Grizzlies won their first game of the season 8-6 over the Tri-State Buffalos.

“It went really well, considering our defense didn’t allow them to score (Tri-State only scored on special teams),” Mirowski said.

The Grizzlies are one of nine organizations in the Southern Plains Football League.

“It’s a legitimate league, and it’s an honor to represent the Albert Lea area,” Mirowski said.