Bernard E. Bolduan of New Richland passed away peacefully on Thursday, July 4, 2013, at the New Richland Care Center at the age of 83. A memorial service will be held at St. Peter’s Lutheran Church in New Richland at 1 p.m. Monday with the Rev. Scott Williams officiating. Visitation will be one hour prior to the service. Military honors will be accorded by New Richland veterans organizations. 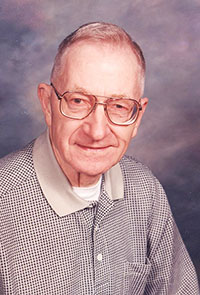 Bernard was born in Waseca County on Aug. 5, 1929, to Alice (Eckart) and Edward Bolduan. After graduation from New Richland High School, he joined the military, actively serving the United States in the Korean War from 1951 until 1953 and was honorably discharged in 1957. He married Marian Stock on July 31, 1957, in New Richland, and they were married 56 years this month. He lived his entire life on the family farm and was a farmer for many years. He also worked at Streater in Albert Lea from 1969 to 1979.

Bernard was baptized, confirmed, and a lifelong member of St. Peter’s Lutheran Church in New Richland and was a member of the American Legion for 60 years. He always had a smile, a caring heart, and a kind word for everyone he knew. He loved life on the farm, enjoyed photography and took great pride in spending time with his children and grandchildren.

He was preceded in death by his parents, Alice and Edward Bolduan of New Richland, a sister, Grace Mehls of Lockport, New York, and a nephew David Mehls of Pennsylvania.

A very special thanks goes to the dedicated staff at the New Richland Care Center and the New Richland Clinic for providing excellent care and comfort during these difficult weeks. He will be sadly missed by his family but his memories will be forever in our hearts.