The property, which goes from Albert Lea’s Madison Avenue to Hartland, would be developed into a multi-use trail. 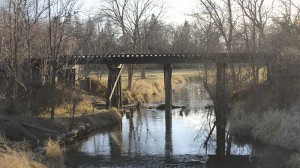 One of the more scenic parts of the former rail corridor is a bridge over a creek at Shoff Park. Trail users will be able to see the park on their left and Dane Bay on their right. –Tim Engstrom/Albert Lea Tribune

“We’re all anxiously excited to find out whether the offer is going to be accepted,” said Freeborn County Administrator John Kluever.

The county has been working to acquire the land since 2010, when Union Pacific officials sent out a letter to county, state and federal officials informing them of their proposed plan to abandon the line. The line had not been used for several years.

This is the first official offer the county has submitted. 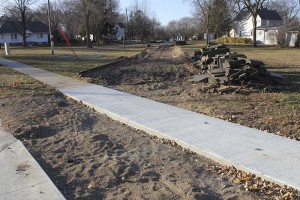 A new sidewalk was laid over a portion of the former line on Fountain Street.

Kluever said the county would pay for the property through a $950,000 Minnesota Department of Natural Resources grant and a $150,000 Federal Recreational Trail Program grant.

How the development of the trail would be paid for has yet to be determined.

Kluever said he did not know the timeline for when the railroad company might respond to the offer. The Surface Transportation Board recently approved a 180-day extension on the negotiations.

Local officials said in a previous interview they have seen the potential of connecting the trail with the Front Street bike lanes, which ultimately connect to the Blazing Star Trail. The completed trail is also projected to bolster property values and make adjacent properties easier to sell.