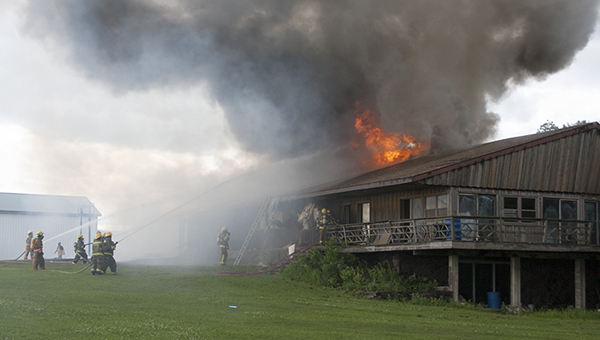 See a gallery of photos by clicking here.

ALDEN — Six area fire departments on Saturday battled a blaze in western Freeborn County that badly damaged a house and its garage.

The fire, at 19635 620th Ave., which is three miles southwest of Alden, left a family without a home. It started in the attached garage before spreading to the rest of the house, according to the Freeborn County Sheriff’s Office.

Authorities were notified of the fire just before 3 p.m., and when deputies and firefighters arrived at the house, the garage was fully engulfed.

Black smoke could be seen for several miles away from the house.

The Sheriff’s Office stated the homeowner, Rodney Wedin, and his family were home at the time of the fire, but everyone was able to get out of the house safely.

The cause of the blaze is unknown.

The local chapter of the American Red Cross also responded.