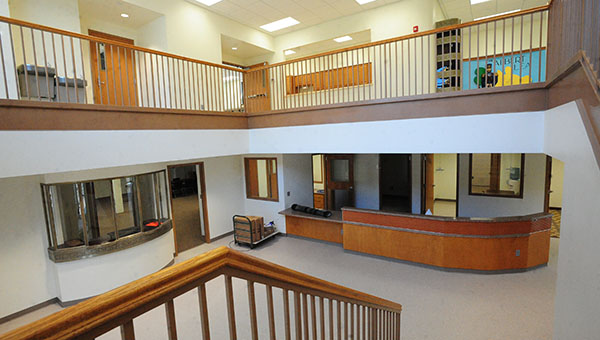 The two-story expansion at the Freeborn County Historical Museum incorporates local history in the architecture. On the upper level of the expansion is a statue of Col. Albert Lea and columns from the old high school and on the lower level is the ticket booth from Cap Emmons Auditorium. — Brandi Hagen/Albert Lea Tribune 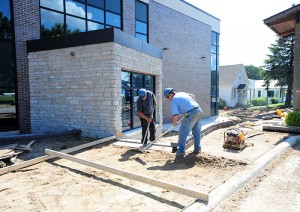 The $1.7 million expansion of the Freeborn County Historical Museum is mostly completed with just a few small projects and setting up exhibits left to do.

Much has changed and will continue to change as artifacts and displays are moved to new areas and more exhibits can be brought out of storage.

The museum underwent a two-story expansion that almost doubled its size. The museum’s library has been expanded, too. A groundbreaking was held in May 2012. There were no changes to the village, other than that it’s more visible now from inside the museum. 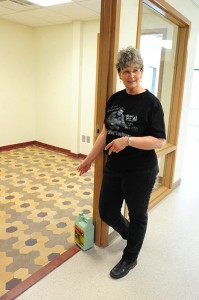 Pat Mulso explains that the tile in what will be the museum’s gift shop came from the 1884 courthouse. — Brandi Hagen/Albert Lea Tribune

That exhibit will also include the museum’s music-themed items. Also on the upper level of the expansion there is a full caterer’s kitchen and large meeting room that can be split into two areas and rented out.

“We already have three class reunions and some birthday parties booked for fall,” Mulso said.

Mulso has an office upstairs and a meeting room. There are restrooms on both levels of the new addition. The new elevator, which will make the entire museum handicap-accessible, and a large staircase join the upper level to the lower. The lower level includes the new main entrance, which has a new sidewalk leading to additional parking. 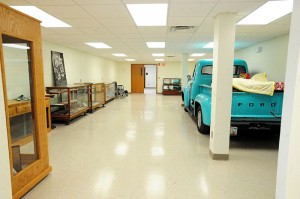 “It’ll be so nice to have our entrance on the side where the parking is,” Mulso said.

Also on the bottom floor is a kids’ learning lab, where children can create crafts and get messy without fear of harming exhibits.

“It’ll be an area for hands-on activities,” Mulso said. 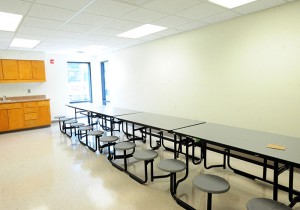 A children’s learning lab was added during the museum’s addition so that kids can do crafts without disrupting exhibits. — Brandi Hagen/Albert Lea Tribune

The lower level will have a reception area and house the library and archives. It even has a separate “isolation” room where staff can clean donated items found in barns, sheds and attics. A special room that will house the gift shop has flooring tiles from the 1884 Freeborn County Courthouse. Mulso said staff had been saving the tiles for a special use, but they found some things in storage for many years that they didn’t know they had. One item that she enjoyed finding was a candy salesman’s suitcase full of glass jars holding ribbon and hardtack candies. 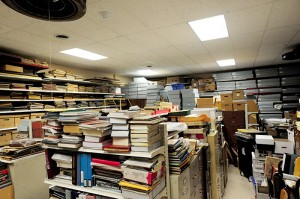 This is part of the current archive room at the Freeborn County Historical Museum. Staff and volunteers have been sorting through the items to get ready to move them to their new spot on the lower level of the museum. — Brandi Hagen/Albert Lea Tribune

The new lower level has a large exhibit space to be dedicated to Marion Ross. The exhibit will have almost all the museum’s artifacts related to Marion Ross, including playbills and personal photos that make up a history of her career. That exhibit leads to space for military exhibits and large windows looking out over the village.

What’ll be in the museum’s original building?

The museum expanded from 12,400 square feet to 22,400, but there is still space in the former building to use, and Mulso said they’re not letting any of it go to waste. 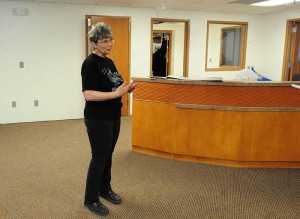 Pat Mulso stands in what will be the museum’s new library. — Brandi Hagen/Albert Lea Tribune

The former building’s lower exhibit area eventually will become more archive space. The other lower level exhibit area that housed the Marion Ross exhibit will become storage. And the old meeting area will be able to house some large printing presses that have been stuck in storage.

The upper level of the old building also has a lot of space to use. What is now the library will become the doll and toy museum. Mulso said the museum already had an expansive collection before it inherited the Story Lady Doll & Toy Museum’s collection. Mulso’s current office will soon exhibit toy trains. The upper exhibit area will remain an exhibit area, but some items will be moved and more items will be added. 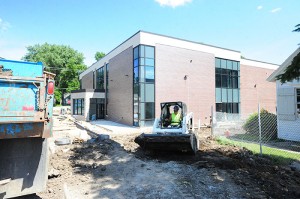 A Larson Contruction employee works on building a ramp outside the addition of the Freeborn County Historical Museum. — Brandi Hagen/Albert Lea Tribune

Moving items and displays and setting them up in their new homes will be a big task. Mulso said the museum will close the week before the Freeborn County Fair so that offices, computers and phones can be moved. The museum will be open during the week of the fair, July 30-Aug. 4, and a grand opening will be held after the fair in August.

There are still some wish-list items that are projects for the future. One will be to close the old main entrance and possibly make it into exhibit space that faces Bridge Avenue. About $250,000 of the $1.7 million price tag still needs to be raised. Mulso said the museum borrowed that amount to be able to finish the building, so museum staff are still hoping for donations to pay that amount. Mulso said every penny will be worth it for how much larger the museum will be and for the many new ways it will be useful to the community.

“We think it’s going to be the best county museum around,” Mulso said.