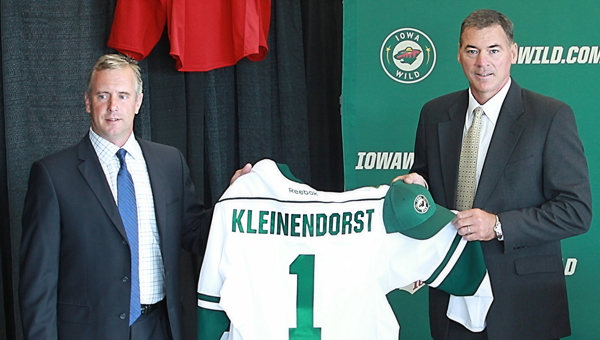 Kleinendorst, 52, is the first head coach in Iowa Wild history. In 2012-13, he led the University of Alabama-Huntsville’s men’s team. He is a veteran of five American Hockey League seasons, serving as the head coach of the Binghamton Senators from 2010-12. Over two seasons, he posted a 71-70-15 record (.503). In spring of 2011, Kleinendorst guided the Senators to a Calder Cup. The Minnesota native was also the head coach in Lowell from 2006-09. Over the course of five AHL seasons, Kleinendorst has 169 wins for the Senators and the Devils.

“We are proud to have Kurt Kleinendorst as the first head coach in team history,” said Iowa Wild General Manager Jim Mill. “He was part of a Stanley Cup with New Jersey in 2003. He has a Calder Cup, a gold medal and a proven track record of developing young players for the National Hockey League. He also understands what the Minnesota Wild need from a development standpoint. I have known him for 24 years. Not only is he a good coach, but Kurt is equally a good person, which makes him the right choice to lead our team on and off the ice.”

Prior to joining Binghamton, the former forward was the head coach of the USA Hockey National Team Development Program’s under-18 team, leading it to a to gold medal at the 2010 IIHF U-18 World Hockey Championship held in Belarus. He also served as an assistant coach for Team USA at the 2008 IIHF World Hockey Championship in Halifax and Quebec City.

A native of Grand Rapids, Kleinendorst spent nine seasons with the New Jersey Devils organization, including three as the head coach of the AHL Lowell Devils, from 2006-07 to 2008-09. Prior to coaching the AHL Devils, he served as a member of the team’s scouting staff for the previous five seasons, including four as a special assignment scout and one season as a professional scout.

Kleinendorst spent three seasons from 1997-98 to 1999-2000 as general manager and head coach of the Manchester (UK) Storm, leading the team to the Super League championship while also being recognized as Coach of the Year following the 1998-99 season. Kleinendorst served two terms, spanning five seasons as head coach and director of hockey operations for the ECHL’s Raleigh IceCaps from 1991-94 and 1995-97 and was named the league’s top coach in 1992-93. He spent the 1994-95 campaign as assistant coach and assistant general manager of the International Hockey League’s San Diego Gulls.

Selected by the New York Rangers with their fourth-round pick (77th overall) in the 1980 NHL Entry Draft, Kleinendorst played professionally for six seasons. He played two seasons in Europe, one with Iserlohn (Germany) and Peliitat (Finland) in 1986-87 and one with the Rotterdam Pandas (Netherlands) in 1987-88. He played professional hockey in North America for parts of five seasons between 1983 and 1990 in the Central Hockey League, IHL and AHL.

Kleinendorst played internationally for the United States during the team’s pre-Olympic tour in 1984 and was a member of the U.S. National Team at the 1981 World Championship. He played four seasons at Providence College from 1979-80 to 1982-83 and was inducted into the school’s athletic Hall of Fame in 1997. As a senior, he was selected to the NCAA All-American Team, named ECAC Player of the Year and was a finalist for the Hobey Baker Award.

The Iowa Wild begins its Inaugural season in October of 2013. Season tickets to see the Wild play at Wells Fargo Arena start at $9 per game.