Making a dent at districts 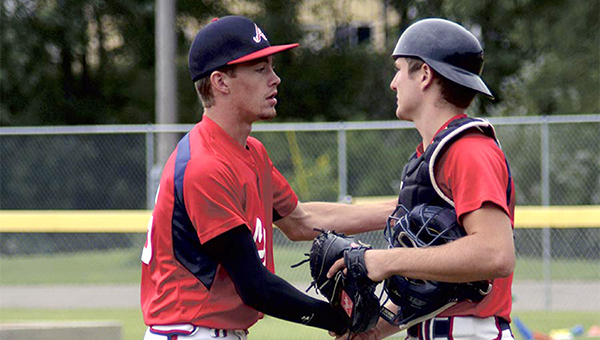 Legion finishes 3rd in District 1 after being seeded 6th

AUSTIN — The Albert Lea/Austin American Legion baseball team finished its season strong, but it wasn’t enough to get them to the district finals.

Albert Lea/Austin had its season end on a 16-7 loss to Owatonna Post 77 in the District 1 semifinals in Marcusen Park Sunday night.

Albert Lea/Austin, 11-17 overall, played Sunday’s round without starters Zach Huntley, who was injured, and Marcus Stoulil and Tommy Olmsted, who were had a church commitment.

“What hurt us was numbers at the end. We hit the wall and we lost some key players. It was tough for us,” Albert Lea/Austin co-head coach Jay Enderson said.

Albert Lea/Austin wasn’t happy to have its season end, but the team was glad to finish third in the tournament after being seeded No. 6.

“Just winning three games was exciting,” said Albert Lea/Austin’s Gabe Kasak, who was 3-for-5 with a triple and an RBI against Owatonna. “Going into the game, I was OK with whatever the outcome would be. Finishing third is not too bad.”

The Albert Lea/Austin baseball team looked like its season was going to be over early Saturday as it trailed the Rochester Redhawks 6-0 after three innings and the team was playing without three starters.

But they weren’t going out without a fight.

Albert Lea/Austin tallied three runs in the sixth when Steven Clennon doubled in two runs and the team added four more runs in the seventh Ethan Horstmann and Dylan See-Rockers each had two-run singles.

In the end, Albert Lea/Austin came back to win 7-6 against all odds.

“Regardless of being short on guys, we came into the game the same as we did yesterday,” Kasak said Sunday. “We figured why not knock off another team, especially a big Rochester school. It was nice to take it away from them.”

Clennon picked up the mound win after a slow start. Over the last six innings, he allowed just one run .

“Those first three inning sucked,” Clennon said. “Then we roped together a couple of hits, and we ended up ahead.”

Albert Lea’s Dylan See-Rockers gave the Austin-Albert Lea Legion baseball team a big boost as they fought off elimination for the second time Saturday in an 8-0 win over Winona in a 1st District elimination game in Marcusen Park.

See-Rockers struck out 10 in a two-hit shutout, and he added a two-run home run over the left field fence in the fourth inning to put Albert Lea/Austin up 2-0.

See-Rockers had walked three hitters in the first innings, but he recovered to allow just six base runners over the next eight innings.

“I don’t know what happened. Something clicked, I felt confident again and I was throwing strikes again,” See-Rockers said. “I’ve been in a tremendous slump hitting. To get us on the board felt great.”

Albert Lea/Austin, which is now in the final four of the 1st District, broke the game open in the sixth inning when they tallied five runs. Steven Clennon singled in a run, Jonathan Fleek had a two-out, two-run single and Gabe Kasak singled in a run with two outs in the rally.

“We just played great today and we knew what we had to do was win. These guys are great and we’re going to keep it going,” See-Rockers said.

But Stoulil put that slump to an end when he pitched a three-hit shutout and the Albert Lea/Austin American Legion team beat Faribault 4-0 in an elimination game at Marcusen Park Saturday. 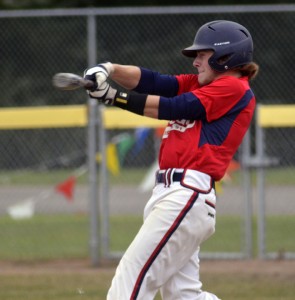 “I didn’t want to think about,” Stoulil said about his bad luck in the postseason. “After so long you’re thinking we’ve never made it out. I just said I’ve got to go out there and do what I can. I’ve got a good defense behind me and they made plays.”

Stoulil struck out 12 and only faced one jam, which was in the fourth inning when Albert Lea/Austin had a 2-0 lead. Faribault loaded the bases with one out on a walk and two singles, but Albert Lea/Austin shortstop Jonathan Fleek turned a double to do end the frame.

Stoulil retired the last 12 Faribault hitters in order to end the game.

“This is more like it,” Stoulil said. “It’s really nice to be able to throw well and get through games. I can’t do it without help behind me. I can’t strike everybody out.”

Albert Lea/Austin got on the board when Zach Huntley reached on an error and Gabe Kasak, who doubled to start the frame, scored from second. In the third, Stoulil put Austin up 2-0 with a two-out RBI single up the middle.

Albert Lea/Austin went up 3-0 in the fifth when Fleek grounded out to score a run and Huntley knocked in a run with a single to right field in the eighth inning.