Puppet show is a riot 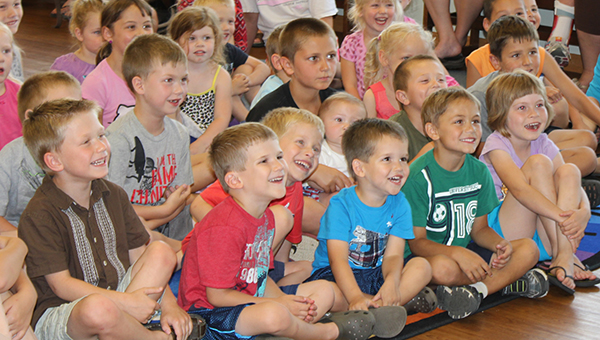 With only two weeks left of summer reading activities at the Albert Lea Public Library, Jim Jayes is back again.

This time he was back to use his marionette puppets to make the children laugh and smile on Thursday afternoon at the library. The last time Jayes came he performed a magic show of equal excitement. Jayes began learning magic and puppetry as a child. He has performed for more than 40 years and said children are his favorite to perform for.

“There is just an utter joy you see from kids that you can’t get from any other audience,” Jayes said.

If they think they know how you did a trick they let you know, Jayes said. They’re more of a challenge but they are more of a reward, too. 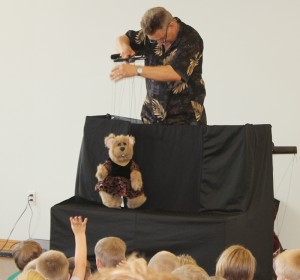 Jim Jayes performs a puppet show Thursday for children at the Albert Lea Public Library as part of the library’s summer reading program.

After meeting a doll that couldn’t keep straight and playing around with the hand puppet Roo, a character from “Winnie the Pooh,” the marionettes came to play.

They performed to music and danced across the stage. First to come out was a not-so-scary scarecrow, who lost his head. The scarecrow was followed by a bear that kept losing his toy ball. Then a clown came out and flew away on his balloon. An old wizard magically pulled colored scarves out of his magic box. A magic rabbit popped out and replaced the wizard’s head, then a chicken came out to lay an egg. Out of the egg popped a chick that liked doing back flips. Next a bear came out and tried to ice skate, and a monkey performed on his trapeze. Finally a large man came out to dance but he danced so fast he turned into birds.

The children enjoyed the funny puppet show, according to Children’s Librarian Patty Greibrok. Greibrok also said Jayes has been performing for the library for 16 years. There is only one guest performance left this summer, the Zoo Man at 2 and 3 p.m. Thursday.

Greibrok said that numbers of children attending have been really high this year, and she’s grateful to the Friends of the Library, who pay for most of their performers, and to the performers themselves for giving back to the community.