Jan Waller, dean of liberal arts and sciences, brought a long association with Riverland Community College to an end when she retired Monday.
Eric Johnson/photodesk@austindailyherald.com

Jan Waller found out firsthand just how much effort it takes to clean out an office after more than three decades of work.

The longtime fixture in Austin’s community college has retired as dean of liberal arts and sciences. Her last day at Riverland Community College was Monday. Once a student at the college, Waller went on to work 32 years at Riverland, starting as an instructor.

“It’s a little bittersweet,” she said. “It’s been a great career for me personally and professionally.”

Looking back on her time at Riverland, Waller remembered some of the college’s successes, like the Board of Trustees Excellent Educator awards in St. Paul. Riverland has had many nominees, but only a few of its instructors have been granted the statewide recognition.

Those moments were big for Waller, but the most rewarding part of the job was seeing students succeed.

“My favorite thing has been attending graduation,” she said. “Our work means something when we can see the students graduate.”

Waller’s time at the college started after she graduated from Austin High School. She attended what was then called Austin State Junior College and received her associate degree along with a secretarial degree.

Years later, in 1981, she took a position at Austin Technical Institute. The college’s director was looking to start a legal secretarial program at the time, and Waller had the experience to fit the bill. She had previously spent about eight years working as a legal secretary at Alderson, Kelley, Ondov and Leonard — the local firm now called Adams, Rizzi and Sween.

She built the program and taught business- and office-related classes for the next 18 years. Some of the students who took her classes later went on to work as staff members at Riverland.

Waller said her time as a teacher was anything but static. There were structural and curricular changes along the way that kept her on her toes and proved challenging yet exciting. Of course, a few technological updates happened along the way, also.

“It evolved from typewriters to computers,” she said. “There were rapid changes.”

Having attended classes once herself in her late teens, Waller felt a close connection to her students once she began teaching.

“I think that’s why I have so much passion for the college,” she said.

Waller had never envisioned herself in an administrative position, but she began to consider it a possibility at the urging of her coworkers.

“A couple of colleagues encouraged me to apply for a vacant dean position,” Waller said. “I thought, ‘I could do that.’”

After so many years as a teacher, Waller was well versed in policy and the workings of the school, and knew the higher-education system front and back. The transition felt like the next step in a natural evolution that began when she was a student.

“I thoroughly enjoy being a dean,” Waller said. “It’s a broader picture; you’re not just focused on your field of study.”

While she has left Riverland, Waller has high hopes for the college in the future. She would like to see it strive to keep tuition affordable, be good stewards of the taxpayer money, and find gaps in student access and correct them. The college must also be sure to support students throughout their years at Riverland, collaborate with other colleges and universities to share programming, and look at ways to cut costs.

“We have to really commit to our comprehensiveness,” she said.

In her retirement, Waller hopes to stay connected to the world of higher education. She’s interested in possibly doing consulting work on a part-time or project-based level.

But her main goal is to help out her elderly mother, who lives in Austin, and to spend more time with her grandchildren in the Twin Cities. She credits her husband, Jack, and their children for supporting her through her career. And while she has given up her desk, she plans to keep up with many of the people she met through Riverland.

“I really built some great friendships that will be lifelong,” she said.

Administrator’s Corner: Strong school board is critical in raising next generation in A.L. 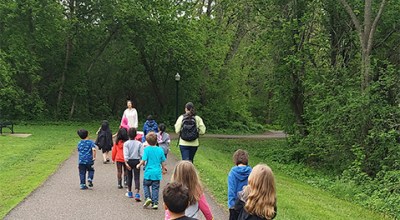 Star Class: Walking the trail for a picnic