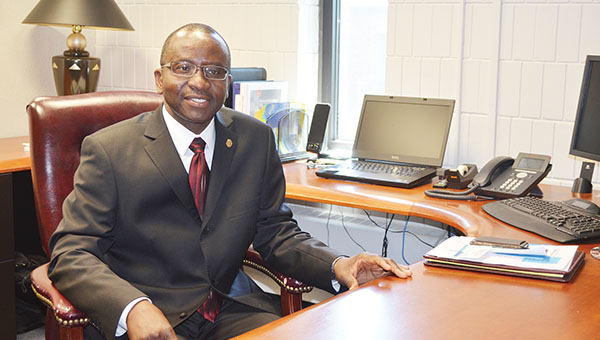 AUSTIN — The first few days at the office have been busy for Adenuga Atewologun.

The new president of Riverland Community College spent Monday and Tuesday getting situated. The Minnesota State Colleges and Universities Board of Trustees appointed Atewologun following a recommendation from Chancellor Steven Rosenstone in March.

Media interviews were scheduled for Atewologun’s first day, in addition to moving into his office, setting up his computer and phone and attending new employee orientation, which he took with Riverland’s other recent hires.

Most of the people Atewologun has met ask the same questions: Why Riverland, and what is he going to get done? The first, he said, is a simple answer.

“I like the quiet calm and peaceful living,” he said, adding people are genuine in southern Minnesota. “So far I find the people very welcoming.”

The second question is a little more complex. Minnesota State Colleges and Universities had a consultant prepare a transition report for Atewologun detailing the situation at Riverland and what employees thought could be done. One overwhelming response, he said, was the request for a dean of student services.

The position had existed years ago at Riverland but was eliminated as part of budget cuts. During a series of meetings with Riverland employees, the overwhelming response was to bring it back.

“I’m collecting that data and acting on it,” Atewologun said.

Riverland should have the position filled soon, he added, which is important.

“This person needs to start as soon as possible,” he said. “Enrollment has been sliding downward. Students are not getting the support they used to get. … That’s affecting retention.”

Atewologun said forming a strategic plan to boost enrollment at Riverland is one of his main goals. Austin has an age demographic from which Riverland could draw, including Austin High School’s graduating classes. A student enrollment committee will look at the obstacles facing different populations of prospective students.

Atewologun expects a strategy could be in place by this time next year.

“I would hope it’s not going to be more than one year,” he said. “I strongly believe it’s possible.”

One of Atewologun’s other goals is to establish each of Riverland’s three campuses — Albert Lea, Austin and Owatonna — as a “center of excellence” for one or more fields, the way Austin’s campus boasts the nursing program. That campus’ specialty could draw more enrollment for students interested in the program.

A few challenges await Atewologun. Being present at all three colleges, for example, will be a balancing act. There’s also the issue of finding sources of funding and financial aid for students.

Finally, Atewologun aims to see the physical appearance of the campuses improve, which will increase interest in Riverland as a whole, he said. Finding the money to accomplish the project could be challenging, though.

“I want us to look like a higher education institution,” he said. “We have to address curb appeal.”

While he’s still getting acclimated to his new role as president, Atewologun said he is settled enough to get down to work. Moving forward, he hopes to continue the partnership Riverland has with area supporters.

“I’ve been really impressed by just how much the community is interested in Riverland,” he said, pointing to groups like the Austin Area Chamber of Commerce, the Hormel Foundation and Rotary International. “There is that connection that I hope will continue to grow.”

Before he started at Prairie State College in 2009, Atewologun was an American Council on Education fellow at Bellevue College in Washington and served in various administrative roles at the College of DuPage from 1997 to 2008. He came to the United States in 1983, earning a master’s and doctorate degree in agricultural engineering from the University of Illinois at Urbana-Champaign before beginning his teaching career in 1990.