The funeral service for Sharon Fay Johnson of Albert Lea will be at 1 p.m. Monday at Trinity Lutheran Church, Albert Lea. The Rev. Ken Jensen will officiate. Visitation will be from 4 to 7 p.m. Sunday at Bonnerup Funeral Service, Albert Lea and one hour before service at the church. Interment will be in Hillcrest Cemetery. 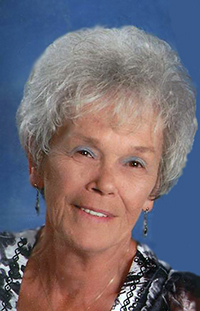 Sharon died Tuesday, July 23, 2013, unexpectedly from complications of a stroke at St. Marys Hospital in Rochester. She was 72 years old.

Sharon Fay Johnson was born April 21, 1941, at Naeve Hospital in Albert Lea, the daughter of Donald and Mary (Nordby) Ringoen. She was baptized in First Lutheran Church, Albert Lea, and confirmed in Round Prairie Lutheran Church, Glenville. She was united in marriage to Don E. Johnson on Feb. 5, 1961. To this union four children were born. She graduated in 1959 from Emmons High School. Sharon worked for 38 years at Herberger’s until her death. She was a very faithful member of Trinity Lutheran Church in Albert Lea.

She was active in the Eagles Auxiliary and Women of the Moose. She served as Senior Regent from 1999 to 2000 for the WOTM. She loved to volunteer at the Moose serving breakfast, burgers and Friday night suppers. She was a very loving mom, grandma, great grandma, sister and sister-in-law. She was the rock for her family. Sharon was a very good dancer and loved to dance to old-time music, especially the Blue Banners. She loved to go to her grandchildren’s sporting events, traveling, reading and going to the casino. She was a great cook and loved to bake for the family. Sharon was a very selfless person.

She was preceded in death by her parents Mary and Arnold Nordby and Donald Ringoen, brother and sister-in-law Vern and Vilma Johnson, brother-in-law Jerry Lechnir and daughter-in-law Sheila Johnson.