AUSTIN — Six Southern belles will stop in Austin this week to make people laugh, cry and be entertained. 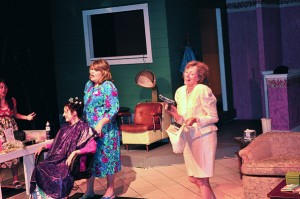 Summerset will perform a production of “Steel Magnolias” at 7:30 p.m. Tuesday through Saturday in the Riverland Community College Frank W. Bridges Theatre.

Riverland and Summerset Executive Director Lindsey Williams described “Steel Magnolias” as a dramatic comedy about a group of women in a small-town beauty parlor in Louisiana during the 1980s.

“It’s a comedy that is very touching,” she said. “You’ll laugh and you’ll cry, and you’ll just have a great time.”

“Audiences will see that their favorite things from the movie are still in the play,” Williams said.

Randy Foster, the director, is highly anticipating the production.

“We have rehearsed for the whole month of June,” Foster said. “So we’re excited to have an audience.”

The play was performed at Riverland in 1995, but Foster is excited to do it again.

“I’ve always wanted to do this play,” Foster said. “It’s an all-American classic.”

The play will showcase an all female cast, featuring students and faculty members.

Williams expects a large audience, so people are advised to buy tickets early.

Individual tickets are $13 for adults and $9 for children age 16 and under. They are being sold at the Summerset Theatre Box Office in room E107 of Riverland’s east building. Box office hours are 11 a.m. to 1 p.m. Monday through Friday and one hour before performances. The box office can be contacted at 507-433-0595 or by emailing boxoffice@riverland.edu. Tickets are also available at www.summersetaustin.org.

“Steel Magnolias” is appropriate for all ages.