Funeral services for Sylvia V. Lindahl of Albert Lea will be at 10 a.m. Saturday at Trinity Lutheran Church in Albert Lea. The Rev. Curtis Zieske will officiate. Interment will be in Graceland Cemetery. Visitation will be from 5 to 7 p.m. Friday at Bonnerup Funeral Service in Albert Lea and one hour before the service at the church. 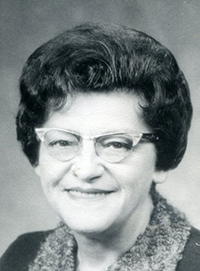 Sylvia Viola Lindahl was born Dec. 11, 1915, the daughter of Chris and Anna Hvolboll.

Sylvia graduated from Albert Lea High School in 1933 and moved to Minneapolis where she worked as a nanny while attending a school of cosmetology. She returned to Albert Lea and operated her own beauty shop.

Sylvia owned and operated Lindahl’s Tavern (Now Harold’s Bar) from 1942 until 1962. After leaving the business she worked at Ben Franklin, then at Flowers By Curt until a bad fall led her to retirement.

Sylvia was active for several years in the Moose Auxiliary and traveled to Atlanta, Ga., to be installed as Deputy Grand Regent (Minnesota State President).

As a member of the Eagles Auxiliary Sylvia was very proud of the national awards won by the drill and ritual teams in which she was active. At the Eagles she served as chairwoman of the Cancer Telethon Breakfast and was presented with the Award of Merit for her outstanding support of the “Eagles Art Ehrmann Cancer Fund” in 1977.

She was preceded in death by her parents; her brother, Lionel (Katherine) Hvolboll; her sister Audrey (Charles) Eastlund; and great-grandson, James Bray.