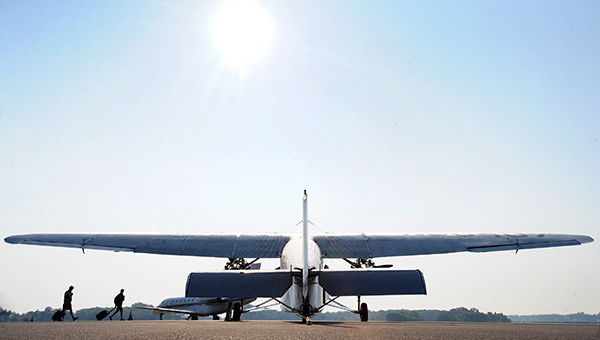 This 1929 Ford Tri-Motor plane is one of two that is still in existence that regularly fly. It landed in Albert Lea on Thursday, and people are able to ride it — Brandi Hagen/Albert Lea Tribune

See a gallery of photos here.

On Thursday, a 1929 Ford Tri-Motor 4AT-E was flown into Albert Lea Airport to give residents a chance to see it and experience a flight. Rides are still being offered today from 9 a.m. to 5 p.m.

About the Ford Tri-Motor

The plane, which calls Pioneer Airport in Oshkosh, Wis., its home, is owned by the Experimental Aircraft Association. It has become a rare find as it is one of two in existence that regularly fly. The second, a Ford Tri-Motor 5AT-E is owned by Kalamazoo Air Zoo in Kalamazoo, Mich. 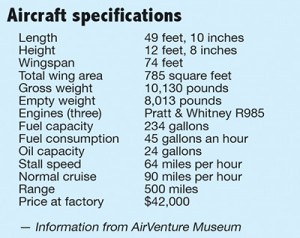 More information about the 1929 Ford Tri-Motor.

Chris Soucy, a volunteer from Arnold, Md., who flew the plane to Albert Lea, said there are eight in existence that could fly, and out of the 199 that were made, she estimated a total of 16 to 18 remain.

The Ford Tri-Motor passenger aircraft isn’t as luxurious as air travelers are accustomed to these days.

The cabin is set up for nine passengers, but if reconfigured could hold up to 13. It’s not pressurized, which means two things. The pilots can have the windows on either side of them open during flight, and the plane has to be flown relatively low at 12,500 feet to maintain oxygen levels. In comparison, a modern day pressurized passenger airplane can fly as high as 30,000 feet.

The Ford Tri-Motor also has to follow visual flight rules. Pilots have to fly low not just because of oxygen. They have to be able to see the horizon to see where they are going. When Soucy and her husband, Colin, flew the plane into Albert Lea, they had with them a paper map, much like a roadmap, to guide them to where they were going.

The plane has a gross weight of a little more than 10,000 pounds, and according to Colin, burns one gallon of fuel per minute. Chris said the plane can be airborne in 600 feet and travels at about 90 miles per hour. In comparison, modern passenger planes when empty weigh about 110,000 pounds and can burn 1,000 gallons of fuel an hour and are airborne in about 1,000 feet.

Fuel for a plane, Colin, a retired airline pilot, added, currently costs between $6 to $7 per gallon.

The Ford Tri-Motor has had a few engines of different sizes installed over its lifetime. The original engines were 300 horsepower Wrights. Then there were 450 horsepower Pratt & Whitney engines, which is what is on the plane now, and for a short period of time, there was a 550 horsepower engine on the front that made it the most powerful 4AT ever flown. 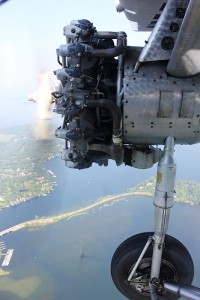 Gauges show information on an outer engine of the plane. The only gauges inside the plane are for the center engine. — Erin Murtaugh/Albert Lea Tribune

“It is hard to pilot. It is slow and sluggish and heavy on the controls,” Colin said. “I like to say it flys like a truck and not like a pickup truck, a dump truck.”

On the interior of the plane, the nine seats are arranged in just two rows.

“Everyone gets an aisle and window seat,” Chris joked.

Also different than a modern day plane is that the only overhead storage is a mesh net that hangs toward the back of the plane.

Safety of flying an 84-year-old plane

Chris said there are no safety concerns with this rare plane. Because it gives rides and is regularly flown, the Ford Tri-Motor has been updated to comply with federal safety regulations.

“We wouldn’t fly it if it wasn’t, trust me,” Chris said. “My last job with the FAA was accident investigation so I’m not climbing on anything that is dicey or questionable.”

The plane does have a slight constant vibration during flight and is very loud, but it’s because of the way it’s built.

Some of the safety features the plane has are flotation devices, seat belts and three exits. One exit is above the pilots, one is above the front row of passengers and then there is the main door toward the back of the plane.

Chris added while the plane has three engines, it could easily fly with just two.

And, even though the plane looks vintage like when it was first manufactured, Chris said most of the parts that make it run have been updated. 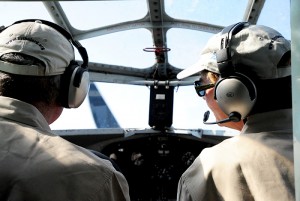 History of the plane

The Ford Tri-Motor has a birthday of Aug. 21, 1929. It was originally owned by Pitcairn Aviation, an airline passenger service on the East Coast.

It was then sold and flew for Cubana Airlines for many years.

After that, the leader of the Dominican Republic bought the airplane for use as an inaugural airliner.

By the late 1940s the Ford Tri-Motor returned to the United States and was used as a crop duster and aerial crop sprayer.

In the 1950s it joined the Johnson Flying Service and was used as a borate bomber and smoke jumping aircraft for fighting forest fires. It was at this point that the doorway into the aircraft got its current shape. Originally it was oval shaped, but it was modified to a more squared off bottom to accommodate the smoke jumpers and their gear so they didn’t get caught.

In the 1960s the plane was owned by an individual who campaigned the plane throughout the Midwest.

For a short span it was leased to Tall Man’s Aviation in California where the airplane became a movie star. The plane can be seen in the 1965 movie “The Family Jewels” with Jerry Lewis and Sebastian Cabot and also 2009’s “Public Enemies” starring Johnny Depp.

In 1973 the aircraft was at an Experimental Aircraft Association convention in Burlington, Wis., and a storm came through that destroyed the airplane. The EAA museum purchased what was left, and over a 12-year period, the plane was restored back to its original 1929 condition. The airplane has flown for EAA ever since, and the money they get helps support the Ford Tri-Motor program and the museum.

Chris said volunteers for the tours wear a standard button-up shirt, but sometimes when they do tours in a town, the people hosting dress up in 1920s attire and bring in classic cars to show off at the same time.

Today is the last day that the Ford Tri-Motor can be viewed at the Albert Lea Airport. Rides and tours will be available from 9 a.m. to 5 p.m. Rides are 15 to 20 minutes long, but longer rides can be arranged at higher prices. The cost to ride is $75 for adults, $50 for children and $125 to ride in the co-pilot seat. There is no charge to view the plane from the ground.