A dredge is the big star up on Machinery Hill 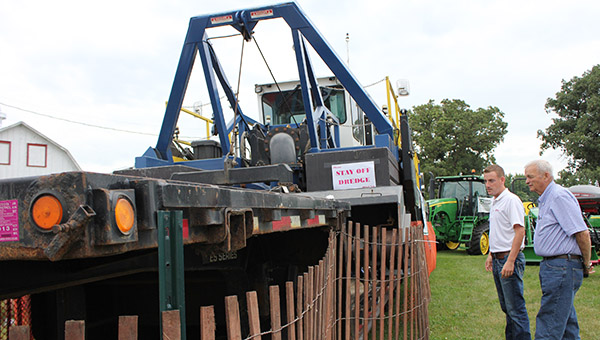 Area residents will get to view the Shell Rock River Watershed District’s dredge at the Freeborn County Fair this week.

The 2010 IMS 7012 HP 51-foot Versi hydraulic dredge is on display on Machinery Hill, across from the beer garden.

District Administrator Brett Behnke said district and community officials hope the fair will be a time people can ask questions about how the dredge will work and what the plans are to dredge Fountain Lake.

It is the last week people can submit ideas to name the dredge.

“I invite people to come out,” Behnke said. “People are curious.”

The district purchased the dredge last fall for about $340,000, along with the pipes, pumping and other equipment necessary to pump the dredge material away from the lake for $435,000.

The purchase came as the community has requested $7.5 million in state bonding funds out of a total $15 million project. Though no bonding bill passed the Legislature in 2013, local officials have worked to make sure the project is included in 2014.

In June, the district officials submitted the project to Gov. Mark Dayton, and Behnke said there is talk that the governor may come down to look at the project. It is also possible members of the House Capital Investment Committee will come to Albert Lea as part of a tour of projects this month across the state.

Behnke said it has not been determined on which end of the lake the dredging would begin.

The district has taken preliminary steps for the dredging, including awarding a contract for preliminary engineering and negotiating the purchase of land that can be used for a staging area. They are also looking at core samples from the lake.

“We’re really going to restore our lakes,” he said.

Albert Lea Convention & Visitors Bureau staff will be on hand at the dredge all week from 11 a.m. to 8 p.m. to answer questions.

People unable to view the dredge at the fair can see it during the Albert Lea-Freeborn County Chamber of Commerce’s August Business After Hours at Edgewater Park.