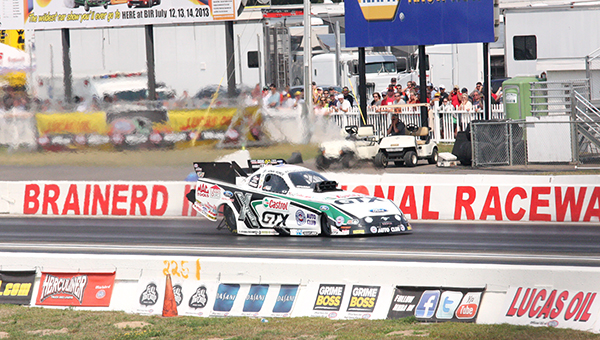 Have you ever been to a drag race? Apparently this is the year of racing for me.

Before we left for Brainerd last weekend, everyone I talked to seemed to be more excited that I was going to the races than I was.

We left Friday after work and headed for the campground we were staying at in Brainerd. We arrived about 10 p.m. and quickly set up our pop-up camper. Thankfully we had set it up once before in the daylight so we had some sort of idea what we were doing. We were ready to live the dream for the next three days. Well, sort of.

Saturday was the first day we were at the track. It was a full day of qualifying races.

I have been to drag races before at smaller tracks and I was excited to catch the fast action with my camera, but I wasn’t sure what else to expect.

If you didn’t know, drag races aren’t just about the racing. It’s about the entire environment. 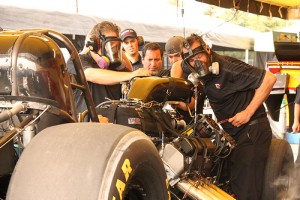 Crew members wear masks to protect themselves from nitro as they work on a car at Brainerd Interational Raceway last weekend.

The way these sort of races are set up, fans are able to stand near the trailers and work stations of the drivers and watch the crew work, meet the drivers and get autographs.

Being that Saturday was qualifying day, we spent a lot of time walking around in the pits.

Nick and Mike included, crowds gathered around the drag cars that were running and little by little the weaker ones of us were weeded out of the pack.

Fighting the battle between plugging my ears from the noise and shielding my eyes, nose and mouth from the nitro coming out of the car I was a lost cause.

It was like I had cut into the strongest smelling onion I can imagine cutting into. My eyes were burning and the tears were running down my face like a waterfall. After the first car did a number on me, I opted to move toward the back of the crowd for the rest. The boys, though, made sure they had front row spots for the action and each time turned around when it was over smiling from ear to ear ready to find the next car that was starting up.

After that experience, I wasn’t too thrilled and was still waiting for the wow factor of the races.

I was not let down.

The finals took place on Sunday and started off with parachutists falling out of the sky flying the American and Canadian flags behind them. It took talent for the parachutists to land on their feet and not let the flags touch the ground. It was from that point on that I really enjoyed the day. 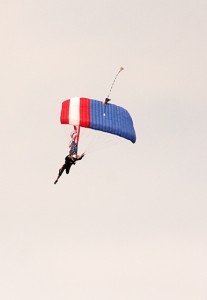 At the start of the National Hot Rod Association finals on Sunday at Brainerd International Raceway, the Canadian flag and the American flag were flown to the track by parachutists.

If you’ve never been to a drag race, you should go, but don’t forget your earplugs. Even the tough guys wear earplugs at the drag races because when a car races past at speeds of more than 300 mph it rattles your eardrums and your insides. It was the strangest feeling I’ve ever had. At the same time it was like an adrenaline rush.

Not long after we started watching, there was a fire. And by fire, I mean an engine explosion.

The Napa Auto Parts car belonging to funny car driver Ron Capps blew up around him as he made a run down the track at a speed more than 300 mph. The crowd was cheering because it was a sight to see, but at the same time I wondered about the driver as the car kept barreling down the track. Incredibly, Capps walked away from the explosion unharmed and went on to win his third Wally (the official trophy of the NHRA) of the season on Sunday. What a thing to witness!

There were a few more fires that weekend but nothing comparable to that one.

There was one other happening I’m going to share with you that was neat to witness before I stop writing and encourage you to go and experience a race yourself.

John Force, one of the biggest names in drag racing with more than 100 career victories and three daughters out on the track, set a track speed record of 4.027 seconds. To make it down the track that fast, Force was traveling at 319.4 mph. If you look at the photo I took during that record-setting run, you’ll see a blurry part of the photo. That blur is not an effect of the camera. It is the exhaust coming off of his car.

The whole thing is just crazy to me. And it makes me want to someday sit in a car and do the same. Because the sport of drag racing is so expensive, though, I highly doubt I’ll ever have that chance, but I’ll add it to my bucket list just in case.

Glenville resident Brandi Hagen is the community editor at the Albert Lea Tribune.