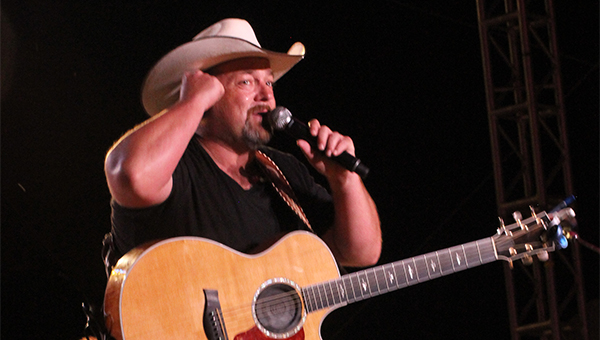 Chris Cagle captured the crowd as he opened his Saturday night performance with “My Love Goes On and On.” Cagle asked who had seen him perform before, and not many people raised their hands.

“I have a great opportunity to make some new friends in Freeborn County,” said Cagle.

The next song he sang was a song about family titled “The Love Between a Woman and a Man.” After his third song, “Laredo,” Cagle said he wanted to get to know the crowd and wanted the crowd to get to know him. He said he would stop to talk about himself and the background of his music between each song.

“This is a song about a girl I can’t stand,” said Cagle as he introduced “Breathe In, Breathe Out.” “Actually I could stand her at one point, but then she broke my heart.”

Cagle had to stop part way through the song to fight back tears because of the number of fans he saw and heard singing along.

“When I grew up, I dreamed of nights like this,” said Cagle, while holding back tears. “My wife told me, ‘Sing from your heart.’ I don’t know that I’ve ever had that mean so much.”

Before beginning the song, “What Kinda Gone,” Cagle announced that he would have a meet and greet after the show for any fan who bought his CD.

“If you’re going to support my album, I want to shake your hand,” said Cagle.

“Got My Country On” raised emotions as Cagle raised his hat to the late George Jones and also took a moment during the song to take off his hat and honor his late father, who died when Cagle was only 20.

Cagle added that because he’s a family man, he doesn’t have any lyrics that parents would have to explain to children on the way home. Before continuing with his music, Cagle shared a story about an elderly man who he had met backstage that was wearing a veteran’s hat.

A woman in the crowd shouted, “God bless our troops.”

His lead guitarist’s son is a Marine and Cagle shared that the military hits even closer to home because of that. Cagle asked those present in the military to stand and tearily asked the crowd to give them a round of applause.

Cagle’s wife had suggested one night that he not only recognize the military personnel, but also the wives and husbands that stay home and hold it together. He then proceeded to sing “Miss Me Baby,” and fans took out phones and lighters to sway along with the song.

The next song, “Dance Baby, Dance,” was inspired by Cagle’s daughter, Stella, coming in and asking him to dance one night, and though Cagle was too tired to get up and dance, took the opportunity because he knew his little girl wouldn’t always be into dancing with daddy.

Cagle shared his experiences of country living and life as a musician through a few more songs and stories. He also tried out some country style rock, along with Lynyrd Skynyrd’s “Saturday Night Special,” as his first encore song, during which he also introduced his band members.

Cagle closed the show with his hit song, “Chicks Dig It,” before heading off stage to begin the meet and greet for purchasers of his CD, “Back In The Saddle.”

“What a great community this would be to live in if everyone was as kind to each other as they are to me,” Cagle said.

Cagle seemed to create a personal connection with his crowd and was amazed with the crowd participation and support shown. 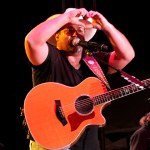 Chris Cagle forms a heart with his hands to show gratitude to his fans during the song “What a Beautiful Day” on Saturday night. — Erin Murtaugh/Albert Lea Tribune 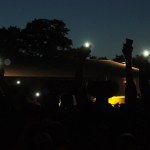 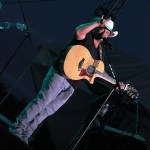 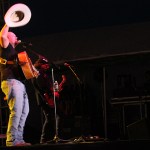 Chris Cagle raises his hat to the late George Jones Saturday night during his song “Get My Country On.” — Erin Murtaugh/Albert Lea Tribune 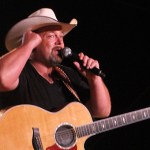