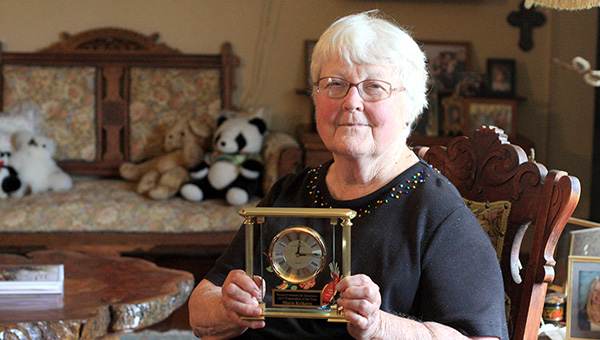 Marie Krikava holds the clock she received for being named as Western Fraternal Life Association Fraternalist of the Year in June. –Brandi Hagen/Albert Lea Tribune

GLENVILLE — Eighty-two-year-old Marie Krikava and her husband of more than 60 years, Alton, may be retired from farming, but they are far from sitting still.

The Glenville residents still have a garden where they grow fruits and vegetables that eventually they can. Among other goods, the garden bears apples, pears, potatoes, corn, beets and lettuce. And they used to grow grapes, raspberries and strawberries. Marie sews, cooks and keeps up on the housework and Alton has found a knack in woodworking.

The rest of their time is mostly spent maintaining the Brick Hall halfway between Myrtle and Hayward and being involved in the Western Fraternal Life Association’s Hayward Lodge 44.

Recently, the efforts of being involved with the lodge led to state recognition for Marie.

She has been the secretary of the lodge for the last 18 years, and on June 22 at the state meeting in Alexandria, she was awarded Fraternalist of the Year.

“I was surprised,” Marie said. “I didn’t know anyone put my name in.”

Marie, 82, said she was shocked by the honor and wished someone would have warned her that she would be getting the award in front of the group of about 70 WFLA members.

In front of the group she accepted a clock that had an engraved nameplate attached to it.

As secretary, Marie does work planning for meetings, community work and other worthy causes including scholarships. And, she said, because the Brick Hall is old, there is time spent on taking care of the building.

The Brick Hall began as a Czech gathering place. Marie, who is of German descent, became involved with it because of her husband’s heritage.

Marie became so interested in the Czech culture that she and Alton actually guided a few tours to the Czech Republic in the 1990s.

“I felt I could show people the very best,” Marie said.

Marie said the tour groups that went to the Czech Republic were mostly from southern Minnesota but also from Wisconsin and Iowa, too.

The reason the couple would travel to the Czech Republic rather than to Germany was because Alton speaks Czech and over time Marie has learned too, but neither speaks German.

Marie said after the Berlin Wall came down and the Cold War ended she wanted to show people how beautiful the Czech Republic truly was. She said she had traveled to the Czech Republic when it was behind the Iron Curtain and said it was a scary place to be.

Another way Marie has picked up on the Czech culture is by making kolaches, a treat made from a sweet yeast dough, for special occasions and events. She is even known as the Kolache Queen.

“I guess there aren’t so many people who do it anymore,” Marie said. “It’s not hard; it just takes time.”

Marie said she puts so much time and effort into maintaining the Brick Hall and Lodge 44 because she is retired and has that time available, unlike many of the younger generations.

According to a nomination letter, Marie served as a 2011 delegate to the national WFLA convention and has helped the lodge win the top lodge award for many years. In addition she has provided referrals that have resulted in increased membership.

Also written in the nomination letter was, “Marie has helped build bridges between youth and adults.”

Part of Marie’s recent community involvement has included gathering lodge members and the Glenville-Emmons softball team to place flags on veterans’ graves in five cemeteries for Memorial Day, organizing Halloween treats, organizing a float and bike giveaway for Glenville Days and presenting a display during two Taste of Heritage events.

The nomination letter concluded by saying, “Marie Krikava is very dedicated to her lodge and community and is truly a generous person.”

Marie has enjoyed her time spent as secretary, but after 18 years she hopes she will be able to pass it on to someone new.

Interesting fact: Marie one time made more than 2,500 kolaches, and they were all eaten in less than an hour.