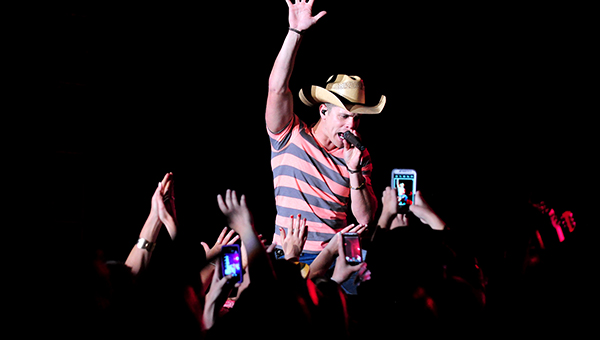 Fans packed around the stage during the Dustin Lynch concert in the Grandstand on Thursday to take photos and touch his hand. –Brandi Hagen/Albert Lea Tribune

The 28-year-old blue-eyed country music singer from Tullahoma, Tenn., had girls, boys, men and women on their feet clapping, dancing and cheering for his entire show Thursday in the Grandstand at the Freeborn County Fair.

Dustin Lynch, a fairly new country music performer, opened his show with “Dancing in the Headlights” and by telling the audience they’d be dancing all night.

Lynch first signed with Broken Bow Records as a solo artist in 2011. In 2012 he debuted his lead-off single, “Cowboys and Angels.”

Lynch saved the single for his second-to-last song of the night. It came after he sang “Rock Your Body,” a Justin Timberlake cover.

As he transitioned into his hit single, he explained he likes all sorts of music, but his “amazing ride” is all thanks to “Cowboys and Angels,” a song he wrote about his grandparents three years ago. Lynch called his grandparents two of his heroes and said their marriage of 58 years and three months is the love story told in the song.

As the song neared the end, Lynch changed the lyrics to say “Minnesota girls and guys like me.”

The little change made the girls in the crowd explode into screaming and cheering.

Lynch’s show had plenty of audience participation. During a couple of the songs, specifically, Garth Brooks’ “Friends in Low Places,” and Travis Tritt’s “It’s a Great Day to Be Alive,” Lynch started just lip syncing and let the audience do the work.

At the start of the show Lynch also sang “Yeah, Yeah, Yeah” and “Last Lap,” before he was distracted and stopped the show to set the crowd straight.

An audience member had been asked by the concert staff to sit back down in a seat. Lynch didn’t think that was a reasonable request.

“Stand all you want, dance all you want and laugh all you want,” Lynch said. “This is not a theater. We like to play to crowds that like to sing and dance.”

Getting back to his show, Lynch went on to say how blessed he is to have written songs that have played on the radio. He dedicated the next song, “Thank a Farmer,” to all the farmers in the crowd.

“I’d like to thank all of you Minnesota farmers,” Lynch said. “God bless you.”

Lynch revved the show back up by explaining where he got his start and by asking: “There are a few single guys on the stage tonight, including myself. How many single girls are out there?”

The response was shrieking and screaming from the women in the crowd.

Lynch’s flirtatious performance held the attention of a mostly teenage audience. The Grandstand and reserved seating was only about half full for the show, but it sounded like a full house with all of the clapping, singing and screaming fans.

Lynch kept asking the crowd if they were ready to party as he sang songs like his new single “Wild in Your Smile,” and “Hurricane,” “She Cranks My Tractor,” “Sittin’ Pretty,” “Rock You Sweet,” and “Name On It,” a song about Lynch being a fan at a Justin Moore concert.

Lynch said Thursday’s show in Albert Lea was on one of the prettiest days he’s played on with the still, warm weather.

In addition to his own songs, Lynch threw in some of his favorite cover songs including Jason Aldean’s “Dirt Road Anthem,” Bruno Mars’ “Just the Way You Are” and David Lee Murphy’s “Dust on the Bottle.”

Taking a break from singing “Friends in Low Places,” Lynch and guitarist Kurt Allison showed the audience something they came up with during their time on the tour bus — the bicep chug.

Allison with a red plastic cup and Lynch with a blue plastic cup drank the contents while only holding the cup with their biceps. Following the chug, the song was resumed.

The show, which started with a lot of energy, ended the same way with another Garth Brooks’ song titled “Callin’ Baton Rouge.”

Lynch had the audience cheering for his drummer to get the song started with a solo. At the conclusion of the solo and song, the audience responded by shaking their hands and cowboy hats in their air in admiration. Lynch, who was just as energized, jumped in the air and stomped on the stage for the last three notes of the song.

Even though the show ended there, Lynch wasn’t done pleasing the crowd. After he and the band linked their arms across each other’s shoulders and took a bow, Lynch threw out guitar picks to the audience and told the crowd to meet him at the merchandise table.

Lynch is on the Light the Fuse Tour with Keith Urban and Little Big Town and his band is also working on “trying to squash” their 60 or 70 new songs down to 10 or 15 to fit onto a second album. 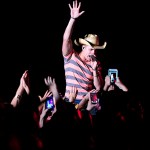 Fans packed around the stage during the Dustin Lynch concert in the Grandstands on Thursday to take photos and touch his hand. –Brandi Hagen/Albert Lea Tribune 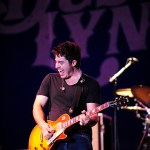 One of the guitarists for Dustin Lynch plays a solo during Thursday’s show in Albert Lea. –Brandi Hagen/Albert Lea Tribune 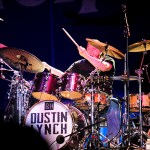 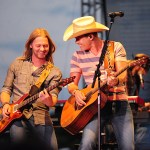 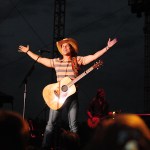 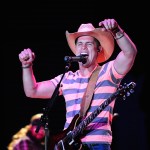 Dustin Lynch sings with the audience to “Dust on the Bottle” by David Lee Murphy. –Brandi Hagen/Albert Lea Tribune 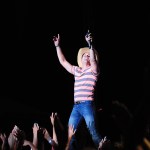 Dustin Lynch holds the microphone up and out toward the crowd as it sang along to “Rock Your Body” by Justin Timberlake. –Brandi Hagen/Albert Lea Tribune 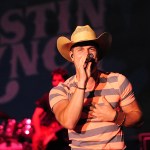 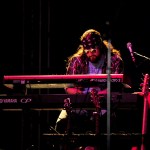 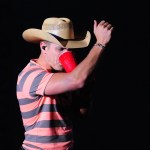 Dustin Lynch does what he calls a bicep chug Thursday at the Freeborn County Fair. –Brandi Hagen/Albert Lea Tribune