Going to the ball? 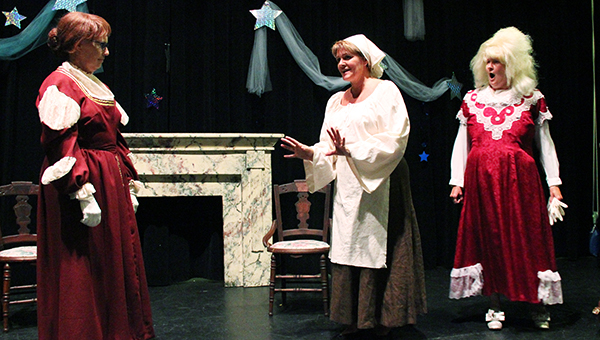 Cinderella, played by Lisa Sturtz, explains to her stepmother, played by Katherine Pacovsky, her desire to go to the ball, while one of the stepsisters, played by Linda Opstad, reacts with surprise. –Tim Engstrom/Albert Lea Tribune

Children’s theater is not like grown-up theater, said the director of “Cinderella, Cinderella,” which opens tonight at the Marion Ross Performing Arts Center.

It’s a lot more interactive. In this one, they even get to come on stage, said Sue Jorgensen.

Children in the audience will get to be guests at the royal ball where Cinderella meets the Handsome Prince. They get to help Cinderella sweep the floor and clean the fireplace. They will make the “gong” noise of the clock striking midnight. They get to slap their thighs to represent the sound of running horses. They even get to wish Cinderella to the ball.

Even the grown-ups get in on the fun at the end when the prince finds his princess. 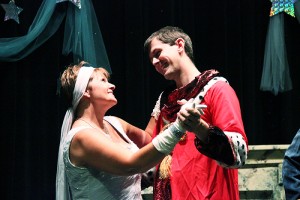 “The real fun is the participation,” Jorgensen said. “The is an opportunity for children to experience live theater.”

She said though summer cartoons are big in the movie theaters, nothing replicates the interaction of a stage performance. And many children, particularly girls, know the Cinderella story from the Disney movies, she said. She encouraged parents to bring their children to the performances. 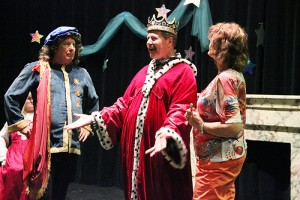 The King, played by Glen Parson, says he wants to find beautiful ladies to attend the ball he is throwing for his son, the Handsome Prince. To the left is Duke Ferdinand, played by Rory Matson, and to the right is the Fairy Godmother, played by Sue Jorgensen.

The performance is a fundraiser for the local chapter of PEO, a woman-centered philanthropic organization. The proceeds go toward scholarships.

Jorgensen said it is the second play the PEO has sponsored as a way to raise funds. The first was two years ago with the production of “Dorothy and the Wizard of Oz.”

She had the scripts for both plays leftover from a series of children’s plays the Albert Lea Community Theatre did back in the 1970s. The hope is that PEO will hold a fundraiser play every other summer, she said.

“Cinderella, Cinderella” is a classic for adults, too, Jorgensen added.