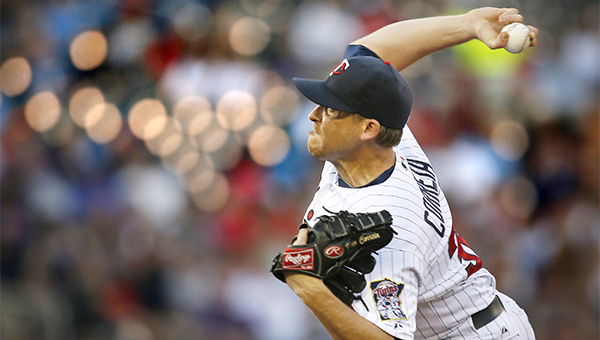 MINNEAPOLIS — Kevin Corriea beat the White Sox on Sunday in Chicago, so he knew his opponent well. Turns out they were a bit familiar with the Minnesota Twins right-hander, as well.

Jeff Keppinger and Adam Dunn hit solo home runs off Correia in the third inning and the White Sox beat the Twins 5-2 to snap a season-worst 10-game road losing streak.

“When you’re pitching against a team in back-to-back starts, you can’t make as many mistakes,” said Correia (8-9), who pitched into the eighth after a shaky run in the early innings. “They’re going to be on them a little bit. The first two runs were a couple hits and a ground ball up the middle, then I just made a couple bad pitches for the two home runs.”

It was the 28th home run for Dunn and Jose Quintana (7-4) was sharp for Chicago, scattering six hits over 6 2-3 innings, giving up two runs and striking out seven.

“Their guy threw the ball really well,” Twins manager Ron Gardenhire said. “It was coming out of his hand really nice. He mixes pitches well. The guys were saying he’s very deceptive and has a little jump on his fastball.”

Joe Mauer homered in the first for Minnesota, but Keppinger and Dunn both homered in the third to make it 4-1. Quintana breezed through Minnesota’s lineup the rest of the way after losing his previous start against the Twins on Sunday in Chicago.

Quintana allowed five runs in five innings in that game, but looked completely different Friday. Early on, the 24-year-old lefty looked to be in for another rough outing when Mauer lined a 3-2 offering into the right-field seats to put Minnesota up 1-0. But Quintana settled down after that, setting the Twins down in order three times.

“Unfortunately we couldn’t come up with any more runs,” Gardenhire said. “We put people out there and missed their opportunity, and there you have it. Ballgame over.”

Dayan Viciedo put Chicago up with a two-RBI single in the second before Keppinger and Dunn added all the insurance runs Quintana needed.

“I think the two pitches I threw for home runs were just bad pitch selection,” Correia said. “I think if I throw other pitches there I have a much better chance of getting outs there. I felt like my stuff was good. I think that’s just how baseball is sometimes. Sometimes they hit it to people, sometimes they miss a mistake. The second time around, they’re usually not going to miss as many mistakes.”

Correia pitched well aside from the third inning, retiring 12 of the 14 batters he faced after Dunn’s homer. The Twins loaded the bases in the third, but Quintana froze Ryan Doumit at the plate on a 12-pitch at-bat to end the threat.

“He had a really good at-bat,” said Gardenhire of Doumit, who was back in the Minnesota lineup after missing eight games with concussion-like symptoms. “He chased a couple pitches high, but in those situations you’ve got to protect the plate and fight off some pitches. He did that, but then the guy threw a nice breaking ball that kind of locked him up on it.”

Minnesota added a run in the seventh when Brian Dozier drove in Wilkin Ramirez on a two-out single to chase Quintana. Reliever Donnie Veal walked Mauer but struck out Justin Morneau to end the inning. Chicago made it 5-2 in the eighth when Trevor Plouffe’s bad throw from third hit Paul Konerko, allowing Keppinger to score.

Nate Jones pitched a scoreless eighth and Addison Reed worked the ninth for his 29th save in 34 chances.

Notes: Chicago INF Gordon Beckham was held out of the starting lineup after leaving Thursday night’s game with a strained right quadriceps. But he entered the game at second in the eighth. … White Sox 3B Conor Gillaspie left with a bruised left hand and is day to day. … The Twins activated Doumit from the DL before the game. Doumit missed eight games after leaving Minnesota’s game Aug. 7 at Kansas City with concussion-like symptoms. The Twins optioned IF Chris Colabello to Triple-A Rochester to make room for Doumit on the roster. … Viciedo returned to the lineup after missing six straight games with a sore left thumb. … The teams will play the third of their four-game series Saturday when Chicago’s Chris Sale (8-11) takes the mound opposite Minnesota’s Andrew Albers (2-0).