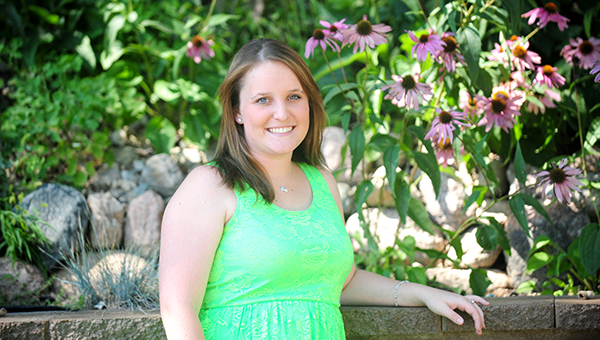 Amanda Weiss will be featured in an upcoming infomercial where she will share her grandpa’s story and his struggle with Alzheimer’s. –Brandi Hagen/Albert Lea Tribune

An A.L. woman will talk about her grandpa and Alzheimer’s disease on an upcoming informercial with Montel Williams

One woman’s crusade for awareness will soon be heard by a national audience.

Amanda Weiss, 26, of Albert Lea, was invited to be a guest on an upcoming infomercial hosted by Montel Williams. Williams was the host of the long-running talk show “The Montel Williams Show,” and he now hosts infomercials under the title “Living Well with Montel.”

Weiss said she was called by producers of his show after they saw an opinion column she had written for the Albert Lea Tribune in 2011 that was shared on various websites.

“Lots of people had linked to it,” Weiss said. “I didn’t even know.” 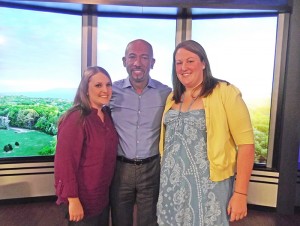 The column was about her grandpa, Wayne Weiss, and his battle with Alzheimer’s. He died in 2005 at the age of 68 after having been bedridden for four years. Weiss said what she wants to make known is not only the toll the disease has on the afflicted, but that it greatly affects family members, too. She remembers that her grandma’s life dramatically changed as her grandpa’s health declined.

“I’m excited I can share my story,” Weiss said.

Weiss said she doesn’t know when the infomercial will air, but she guesses her segment will be around six minutes of the 30-minute infomercial. She said Williams is promoting a supplement that could help with symptoms of early-onset Alzheimer’s.

Producers came to Albert Lea to interview Weiss on July 31. They asked questions and taped her answers in her home, and then took more footage of her walking around Fountain Lake.

Then Weiss was flown out to New York City on Aug. 14. She met with Williams on the set of his talk show and taped an interview with him. Williams asked Weiss what it was like for her family to experience her grandpa’s illness and how she wants to keep spreading the word. She said they talked about how it can be tough emotionally to have a loved one still alive but they’re not really the same person once the dementia progresses. It’s also a fear of hers that someday someone in her family or even she could be diagnosed with Alzheimer’s.

“It was such a good opportunity to share my grandpa’s story and keep his life alive,” Weiss said.

Another guest, Maria St. Clair from Indianapolis, Ind., talked about her experience ever since her mother was diagnosed with Alzheimer’s.

“I’ll probably keep in touch with Maria since she had never heard of some resources,” Weiss said.

Weiss and her college friend Molly Stark stayed in a hotel at Times Square and visited Central Park and the Empire State Building before flying home on Aug. 16.

This isn’t the first time Weiss has advocated for more research for Alzheimer’s, but it will likely be the biggest audience. Prior to the infomercial, she has been in contact with the Minnesota Alzheimer’s Association and has gone to Washington, D.C., to advocate with legislators.

“And I’ve participated in memory walks,” Weiss said. “There’s one in October in Owatonna, and I’d love to see one happen in Albert Lea.”

Weiss is the daughter of Keith and Wendy Weiss. She is employed by the United Way of Freeborn County as a marketing and communications specialist.