Kenny Rogers sings all the classics at the county fair 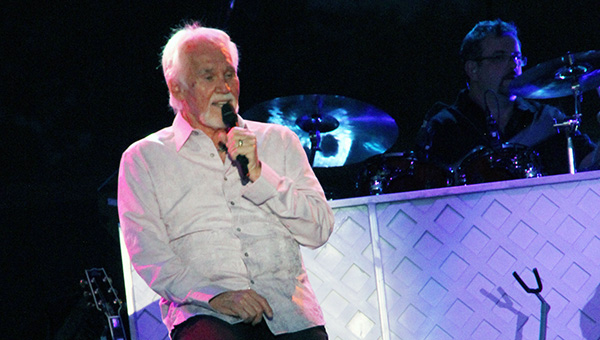 Kenny Rogers sings “The Greatest” at the Freeborn County Fair. The song is about learning what a boy is good at. — Erin Murtaugh/Albert Lea Tribune

As the first notes of “Love or Something Like It” played, the crowd cheered, and Kenny Rogers took the stage Friday night at the Freeborn County Fair. Rogers started off the night with two of his faster songs, leaving fans a little dazed. 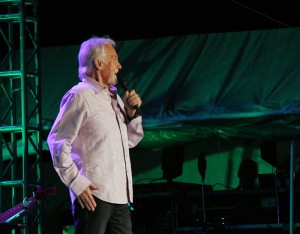 Kenny Rogers performs “Have a Little Faith in Me” on Friday night at the Freeborn County Fair. — Erin Murtaugh/Albert Lea Tribune

“Thank you very much and welcome,” Rogers said. “Don’t worry those are the loudest songs I know.”

Rogers told the crowd he liked being able to see their faces but normally he isn’t able to see faces.

“Usually they keep it dark all the way back,” Rogers said. “One night I thought to myself, my god these people could leave and I wouldn’t even know.”

Rogers said as a rule he doesn’t pick on people but there was a woman in the eighth row that had the biggest binoculars he had ever seen.

“What are you trying to see with those?” Rogers asked her. “I think binoculars in the first 10 rows is an invasion of privacy.”

On that note, Rogers went on the play “If You Want to Find Love” and “Through the Years.” 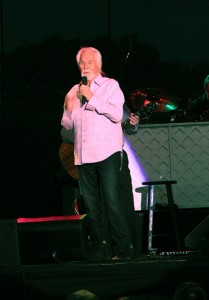 Kenny Rogers introduces himself after performing his first song of the night, “Love or Something Like It.” — Erin Murtaugh/Albert Lea Tribune

Rogers said that the crowd he played for in Quebec did a better job.

“They don’t even speak English in Quebec,” Rogers said.

Rogers proceeded to praise his friend Don Schlitz, writer of “The Gambler” and “The Greatest,” saying he has a gift for making music relatable.

Rogers played songs “Coward of the County,” “Daytime Friends, Nighttime Lovers,” and “She’s a Mystery to Me.”

Rogers said “She’s a Mystery to Me” is the song that makes him sure men are from Mars and women are from Venus.

Rogers continued to play “Something’s Burning,” “We’ve got Tonight,” and “Stand Up.”

After that song Rogers asked the crowd if they knew what was wrong with the picture. He informed the crowded the name of the song was “Stand Up.”

Rogers gave the crowd one last chance to stand up as he sang the refrain again. 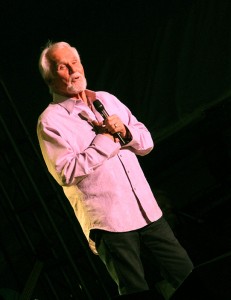 Kenny Rogers speaks to the crowd about being in the music industry for 50 years. — Erin Murtaugh/Albert Lea Tribune

Of course, Rogers played “The Gambler” and closed with a classic “Lucille,” which the crowd sung along with perfectly.

Once the song was done Rogers told the crowd that he wouldn’t be going and hiding and pretending he’s not coming back.

“It’s not like you don’t know I’m coming back,” Rogers said.

So without going to hide to wait for the crowd to ask for an encore, Rogers played two final songs “Lady” and Rogers’ favorite duet he has ever done, “Island in the Stream.”

This was Rogers’ 50th year in the music business.

“It’s been a great ride,” Rogers said. “I’ve made some great friends.”

Last April, Rogers did a show called “The First 50 Years.”

“The idea insinuating that I have another 50 years,” Rogers said. “I don’t like my chances.”

Rogers said the show was a real treat to see his old friends, but what made it really special was it had all the original members of The First Edition, a group Rogers was in prior to being a solo artist.