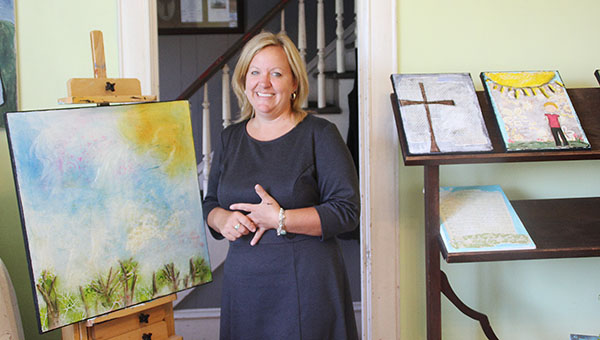 Kelly Gau stands with some of her art at her studio in her home last week. –Erin Murtaugh/Albert Lea Tribune

LAKE MILLS — In high school, Kelly Gau wanted to become a commercial artist. Her dream of being an artist is finally coming true. About a year and a half ago, she quit her job at the Lake Mills Public Library to become an artist.

“My goal is to create something that is worth looking at more than once,” Gau said. “It has touched people deeply.”

Gau took two classes to learn the skills necessary to make her works of art, which she calls “lovelies.” She said all the pieces started to align, and her faith directed all of it. 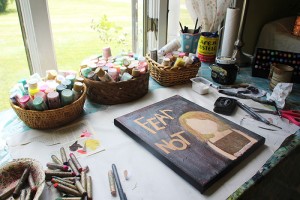 A work in progress is laid out on Kelly Gau’s table in her studio in Lake Mills.

Gau’s mother gave her the money to take the classes. One was called “Listening to the Holy Spirit,” which included journaling. Gau incorporates what she gets out of journaling into her works.

“God really wants to talk to us and to be still and listen,” Gau said.

The other was a mixed media class on how to use stamps, paint, ink and paper to create art.

The name lovelies just came to Gau. She said it’s who she is and thinks, “That’s just so lovely,” when she looks at her art.

She said all of her lovelies are her favorite but when it comes to the meaning of a picture, it would be a painting she made of her mom.

At first, Gau gave all of her pieces away. She would make art for her mom, sisters, friends and people at her church. Her friend, Jodie Bachtle, gave her a box of canvasses and told her they were to be sold once they were made into art. 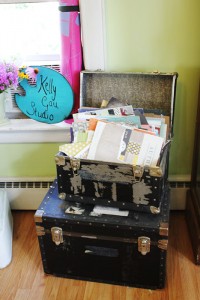 Kelly Gau keeps her supplies in a variety of containers, such as old trunks.

Gau sells her work on Facebook only for the time being, but, if the opportunity comes, she would sell through a gallery or similar setting. She will have a booth with her work this Wednesday at the Wind Down Wednesday festival in Albert Lea. Gau has a website, but it directs customers to her Facebook page.

Aside from making and selling art, Gau also teaches a class called “Creating a Lovely.” The class is held at the studio in her home, but she is open to traveling. She does home parties and children’s parties in addition to classes.

Gau has sent her art all across the country, and the world, including Kansas, Washington, California, Ireland and Dubai.

Interesting fact: Gau has sold more than 565 of her “lovelies.”