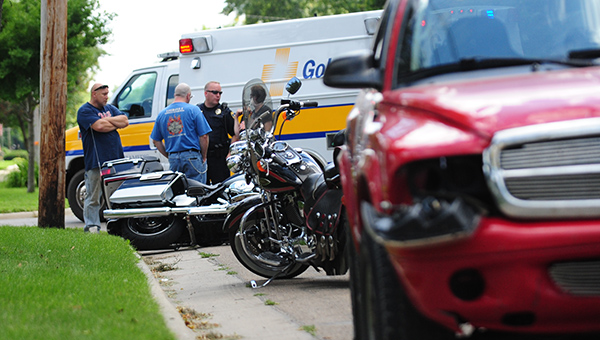 A police officer speaks with witnesses of an crash Saturday between a 2013 Harley-Davidson motorcycle and a Dodge Durango. –Micah Bader/Albert Lea Tribune

A man was injured Saturday afternoon after he and his wife were struck on their motorcycle by a sport-utility vehicle at the intersection of Frank Avenue and Third Street in Albert Lea.

The 2013 Harley-Davidson Ultra Glide was reportedly driving north on Frank Avenue after 2 p.m. when a red 2001 Dodge Durango driving on Third Street reportedly failed to yield to the motorcycle and struck it broadside while turning north onto Frank Avenue.

Police stated Jimmy Dale Anthony, 63, was transported to Mayo Clinic Health System in Albert Lea. His wife, Jane Ann Anthony, 58, received minor injuries but was not transported to the hospital. Police have not stated whether the husband and wife were wearing helmets.

The driver of the Durango was identified as Savannah Simpson, 16. Simpson and passengers Chastity Ann Stenseth, 15, and Augustus Dean Stenseth, 12, were not injured.