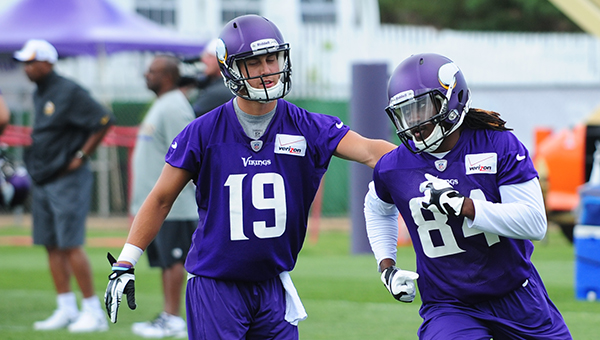 Adam Thielen, left, of the Minnesota Vikings plays a defensive back during a drill at training camp in Mankato with the responsibility of covering fellow rookie wideout Cordarrelle Patterson. Thielen was undrafted out of Minnesota State University, and Patterson was selected in the first round with the 29th pick. — Micah Bader/Albert Lea Tribune

Patterson is a lock for a roster spot; Thielen is still fighting

Patterson was a first-round draft selection from Tennessee, a player the Vikings coveted enough to trade four lower picks to move up and get. Thielen came from Division II Minnesota State and didn’t land on the roster until after a weekend of minicamp.

But Patterson hasn’t bought into the notion his new buddy has a lesser stature because he’s from a small school and working without a guaranteed contract.

“I love him to death, not only as a teammate but as a friend. I hope he makes this team. He’s a great guy,” Patterson said. “I could see him playing with me. If he would’ve come to Tennessee, he was guaranteed to play there.”

Minnesota State was Thielen’s only scholarship option out of Detroit Lakes, where he grew up rooting for the Vikings and trying to imitate Pro Football Hall of Fame wide receiver Cris Carter’s tiptoe sideline catches in his backyard. He wasn’t even sure he’d pick football over basketball when mulling his college choices.

But after a standout career with the Mavericks and some speedy sprints in front of NFL scouts during the offseason, Thielen wound up at the rookie minicamp with the Vikings, with dozens of other hopefuls.

“I was just going out there with a mindset to show that I belonged here. I had total confidence in myself that I was good enough,” Thielen said. “I just wanted to prove that to the coaches and put it on their belts and see what happens.”

Now he’s trying to make the team. Veterans Greg Jennings, Jerome Simpson and Jarius Wright are locks, along with Patterson. So Thielen is vying with Stephen Burton and converted quarterback Joe Webb, among others, for what’s probably the last spot on the 53-man roster. The practice squad also is an option.

“He’s fast. He’s got good routes. Everything about him is smooth,” Patterson said.

Thielen has the benefit of running around on the same fields he practiced on in college. Mankato has been the camp home of the Vikings for 48 years, and Thielen used to watch Percy Harvin and Sidney Rice go through drills and take back what he learned to the Mavericks.

Now after workouts, he’ll walk by the office of Minnesota State coach Aaron Keen and tell him how the day went. Another former Mavericks wide receiver, LaMark Brown, is also in camp.

“I wouldn’t want to be another place,” Thielen said. “This is awesome.”

His route running ability has helped him stand out.

Thielen had 74 receptions for 1,176 yards and eight touchdowns as a senior last year, when Minnesota State advanced to the NCAA Division II semifinals. But he didn’t attract much professional attention until after the season.

The 6-foot-2, 195-pound Thielen took advantage of the NFL’s combine system, which gives prospects not invited to the main pre-draft event, the National Scouting Combine in Indianapolis in February, an opportunity to prove their worth in the same individual skill drills.

He went to Chicago in March for one of the eight regional combines, which require players to pay their own way. After running fast enough to warrant an invitation to the Super Regional Combine in Dallas in April, Thielen ran a 4.45-second 40-yard dash, according to some of the scouts who were timing him.

The league says 69 players who attended a regional combine were on a roster at the start of training camp, including 42 from the Super Regional Combine. Four of them were drafted.

“He was one of the faster players on our roster, but I don’t think I had a good idea of just how fast he was or how fast he could make himself,” Keen said.

MANKATO (AP) — The Minnesota Vikings have signed linebacker Stanford Keglar, starting his second stint with the team this summer.

Keglar was with the team from May 29 to June 27, when he was let go and linebacker Desmond Bishop was signed. The 28-year-old Keglar has played in 35 NFL games with Tennessee and Houston but hasn’t appeared in one since 2010 with the Texans. He was a fourth-round draft pick from Purdue by the Titans in 2008.

Bishop hasn’t practiced since Friday because of a groin injury.

Williams was on the physically unable to perform list.