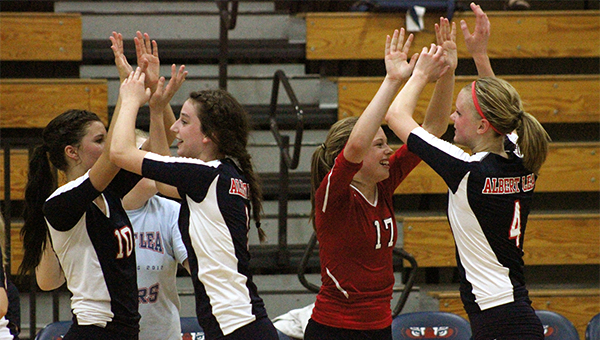 Albert Lea takes momentum from NRHEG during Game 4, rides it to victory

The Albert Lea volleyball team proved Thursday it can bounce back from a loss.

The Tigers fought off elimination in the final two games to win the match 3-2 over New Richland-Hartland-Ellendale-Geneva.

“We have the strongest team that we’ve had in a long time at Albert Lea,” Tigers head coach Lisa Deyak said. “Every day they come to the gym and work hard to be a better team. They’re fighters.”

Albert Lea held an eight-point lead (13-5) halfway through Game 1, but NRHEG stormed back to win 30-28 on one of Carlie Wagner’s three blocks.

However, the Tigers regrouped in Game 2. After building another early eight-point lead (12-4), Albert Lea didn’t let up and won by double digits.

Game 3 was equally as lopsided, but this time the Panthers took the win.

With the match on the line, the Tigers played their best game yet in Game 4. Albert Lea built a 14-3 lead on an ace serve by Julia Deyak, which was followed by one of Kassi Hardies’ six blocks.

NRHEG still held the lead in the match, but Albert Lea had the momentum.

“To go out after they beat us and just catch fire — to get our lead and just go with it — that was huge,” said Annie Ladwig. “

Hardies and Taylor Willis tied with a game-high six blocks.

“They ended up triple-blocking Carlie, which is insane for a high school kid who only plays volleyball two months out of the year,” NRHEG head coach Onika Peterson said. “But, we worked our butts off, so I have to be happy with that.”

After not being able to finish Tuesday’s game at Southland, due to damp and slippery floor conditions, Deyak said she was grateful to complete the match against NRHEG in a safe manner.

“Despite having a non-air conditioned gym, our floors were dry,” she said. “At 7:30 a.m. this morning, I saw the fans were out. We have an amazing custodial staff.”

Waseca is 0-1 after losing 3-1 at Rochester Lourdes Tuesday. Waterville-Elysian-Morristown is 1-0 after beating Triton 3-2 at home Tuesday. 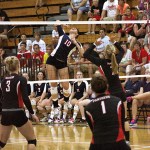 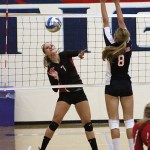 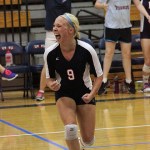 Bryn Woodside of Albert Lea celebrates in the foreground, while her head coach, Lisa Deyak, lifts her arms in the background Thursday after defeating New Richland-Hartland-Ellendale-Geneva. — Micah Bader/Albert Lea Tribune