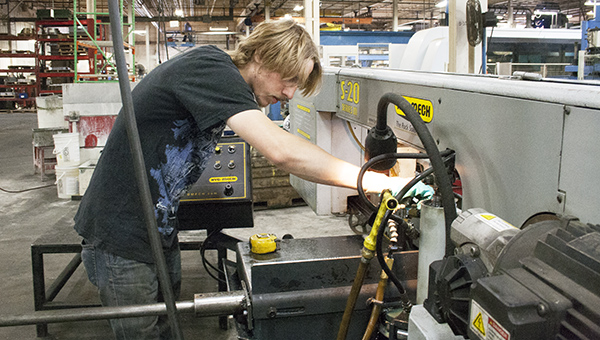 The Minnesota Youth Apprenticeship program in Albert Lea is gaining recognition across the state for its work teaching technical skills to high school students.

The program began locally in 2012 and this school year is expected to include four employers: Lou-Rich, Ultimate Automotive, Edwards Manufacturing Co. and Interstate Molding. 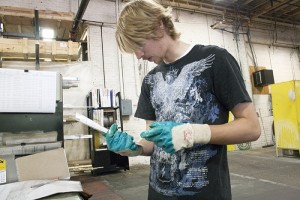 Bradford Milliron looks over an order to fill at Lou-Rich on Friday. — Sarah Stultz/Albert Lea Tribune

“Albert Lea has really stepped up to the plate on this and continues to add to an already outstanding array of services for any student that elects to participate in this program,” said Al Hauge, specialist with the Department of Education Youth Apprenticeship program.

Besides Albert Lea, the program is underway in Anoka.

The Minnesota program, through the Minnesota Department of Education and DEED, is modeled after a Wisconsin course that incorporates classroom training, mentoring and hands-on experience.

“There is a lack of experience in those fields,” Ponce said. “It’s hard to find anyone with that experience.”

This year it will expand to include auto mechanics and other manufacturing skills.

Johanna Thomas, assistant principal at Albert Lea High School, said school officials looked for students interested in industrial technology to be a part of the course. Three students completed the program in the 2012-13 school year, and seven to nine hope to finish it this school year under the direction of Kim Meyer, the youth apprenticeship instructor, they said.

The students go through safety training and apply what they are learning in the classroom in the job field. Juniors complete 450 hours of paid work-based learning, and seniors complete 900 hours, Thomas said. They complete multiple semesters of related classroom instruction, in addition to their other academic classes.

Bradford Milliron, who is completing his apprenticeship at Lou-Rich this month, said he knows the experience will be positive for him.

He plans to pursue training in mechanical engineering.

Ponce said students are treated the same as the company’s regular employees and go through interviews and drug screenings before they are matched with a mentor. They also go through orientation and safety training just like other new employees.

After meeting certain criteria, the students can even receive raises in pay.

Ponce said she has heard nothing but positive feedback from the program. She said she thinks it is good for the students to learn different work styles and to gain an insight into the industry.

Likewise, they can build resumes and gain references for the future, said Valerie Kvale with Workforce Development Inc., who has been the coordinator with local businesses.

Dan Mattick, owner of Ultimate Automotive, was glad to add his business to the program.

“I think it’s a great opportunity for the kids,” Mattick said. “When I look back I wish there was something like that when I was in school.”

Thomas said the program has been successful thus far because of all of the collaboration in the community.