AUSTIN — Area residents are invited to join pork breeders and college students from across the nation for the 67th annual National Barrow Show in Austin.

The NBS and Junior Barrow Classic run Sunday through Wednesday at the Mower County Fairgrounds.

The NBS, billed as “The World Series of Swine Shows,” showcases many of the top breeding boars and foundation females in the country, and all eight major swine breeds. The junior show features some of the top college judging teams from across the country. 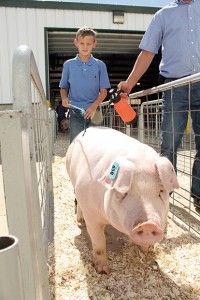 Presenters and pigs will once again will be coming into Austin for the National Barrow Show held at the Mower County Fairgrounds starting Sunday. –File photo

“This is one of the premier events in the country for swine producers and students of the industry,” said local NBS committee chair Joel Nelson. “It’s an Austin tradition, and a great way to showcase this vital industry. It also provides a great economic boost to our community. Our hotel rooms are filled with NBS participants from all across America.”

The number of participants and animals shown reaches into the thousands, and this year organizers project 1,100 animals from more than 20 states, as far as California and Texas. More than 400 college, 4-H and FFA students are expected to compete in the judging contests, representing major universities and chapters from across the nation. More than 300 additional entries are expected for the NBS Junior Show and Barrow Classic.

As always, the public is invited to the opening community Windsor pork chop dinner, 11:30 a.m. to 1:30 p.m. Sunday in the Plager Building. Tickets for the dinner are $8 and available in advance at at the Austin Area Chamber or at the door.

For more information go to www.mowercountyfair.com and click on the National Barrow Show link.