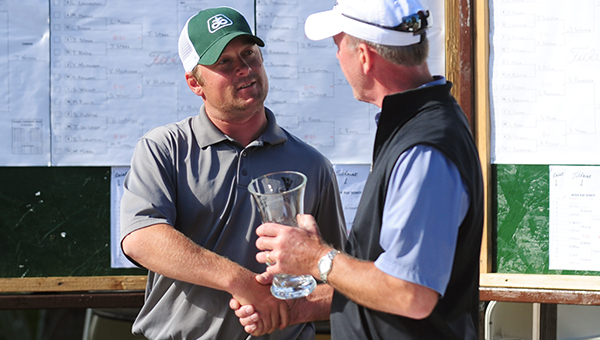 “I’ve played a lot of golf with Phil over the years,” Baas said. “It helps to have a guy who understands my game. It gave me a little more confidence.”

“We’ve always competed hard against each other,” Baas said. “He graduated (from ALHS) in ’93, and I graduated in ’95, so we’ve always been battling.”

After the tournament, Baas said he will take a break from golfing. He wants to spend time with his wife, Jernelle, and their 11-month-old son, Grant.

“She’s very nice when it comes to letting me practice,” Baas said. “I promised that I’d have fun this weekend and I’d be done golfing after this tournament.”

Earning runner-up honors in the championship flight was Alex Lair. Lair was a 2006 graduate of ALHS, and Baas and Schmidt were his golfing mentors in high school.

“Some of my fondest memories back when I played for the Tigers were when Chris and Phil would play practice rounds with me before section and Big Nine (Conference) tournaments,” Lair said. “I’ve been looking up to those guys for a long time. It’s fun to be on their level and play some good golf against them.”

Lair’s caddie was his father, Loren.

“I really have to thank my dad and the rest of my family and friends for supporting me,” Lair said.

While pursuing his undergraduate degree at Gustavus Adolphus College in St. Peter, Lair exchanged his golf club for a hockey stick. He played three years for the Gusties hockey team. Now, Lair is in a master’s program at Augsburg College in Rochester, and his focus has shifted from the ice to the fairway, he said.

The Shortstop Golf Tournament is run in a match-play format, where each player fights off elimination in each round. The host site allowed the first 128 event applicants to compete.

“I really want to thank everyone for coming out to the tournament to watch,” Baas said. “It’s really neat for us to have 500-plus people come out and watch.”

Individual winners are listed below the gallery. 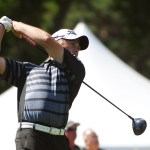 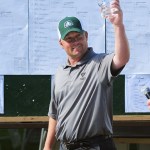 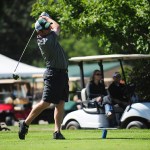 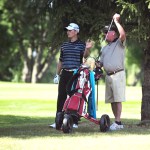 Alex Lair, left, asks for a club from father Loren, who was his caddie Monday at the Shortstop Tournament at Green Lea Golf Course. Lair finished as the runner-up. — Micah Bader/Albert Lea Tribune 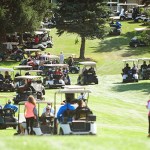 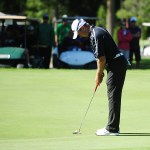 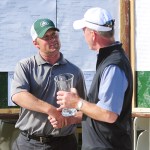 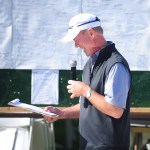 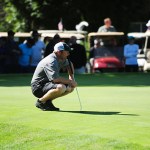 Chris Baas looks at the terrain on the 12th-hole green at Green Lea Golf Course during the Shortstop Tournament Monday as spectators look on. — Micah Bader/Albert Lea Tribune