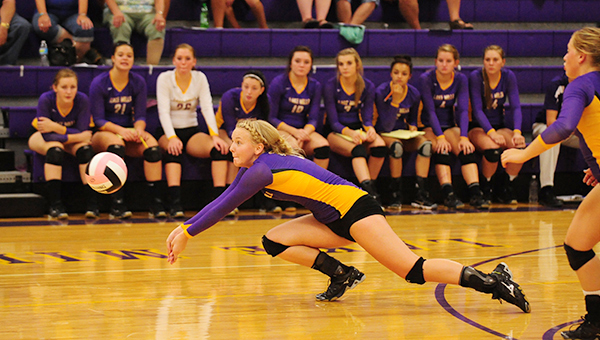 Lake Mills coach has seen team get better with each match

LAKE MILLS — The Lake Mills rebuilding project is starting to come together on the volleyball court.

The Bulldogs had a tall order: replace last season’s top four hitters. To fill those shoes, senior Morgan Christenson and sophomore Madison Shifflett proved to be a formidable duo at the net.

In a 3-0 win over North Iowa on Thursday, Christenson and Shifflett combined for 22 kills, and Brooke Hagen excelled as a setter with 33 assists.

Lake Mills head coach Jim Boehmer said Hagen is the only returner who played varsity exclusively last season. Through nine matches this year, the Bulldogs built a 7-2 record, but more importantly, Hagen is getting to know her hitters.

“Our chemistry really has improved,” Boehmer said. “It takes a little while to get used to each other. Each time out we get better.”

The two losses Saturday at the Algona tournament against Algona were hard on the Bulldogs, considering the expectations for a team that was undefeated during the regular season last year. However, the new lineup gained valuable varsity experience against quality competition.

“It was a tough tournament, and we played hard,” Christenson said. “They were a good team, but it’s nice playing teams like that. It will help us later.”

Early in Game 1 against North Iowa, the Bulldogs and Bison were trading points. Lake Mills clung to a 19-17 lead.

“We just didn’t feel like we had our normal energy,” Lake Mills head coach Jim Boehmer said. “We were really battling before we took off.”

The Lake Mills bench and the Bulldogs student section, clad in hunter’s orange and camouflage, gave the team a boost.

“Every match our fans do a theme, and our student body loves it,” Boehmer said. “I have to give a shout-out to the student body, because they had a lot of passion and a lot of energy. I was impressed.”

In Game 2, Lake Mills began to hit on all cylinders. The Bulldogs took a 13-5 lead with a block by Shifflett and finished the Bison off with a 12-2 run.

Lake Mills took an 11-2 lead in Game 3 with the first four points coming on serves by Christenson, and the Bulldogs completed the sweep with a 25-12 win.

Next, Lake Mills will play in a tournament at Central Springs at 9 a.m., Saturday. 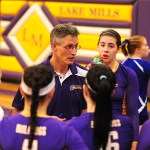 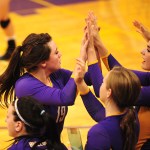 Rachel Segura of Lake Mills high-fives her teammates before taking a seat on the bench Thursday during a 3-0 win over North Iowa. — Micah Bader/Albert Lea Tribune 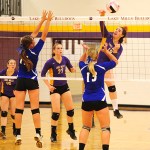 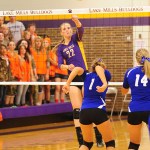 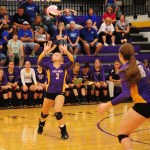 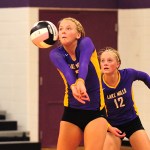 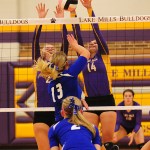 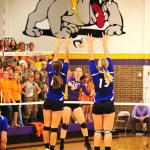