Downtown alley gets an upgrade 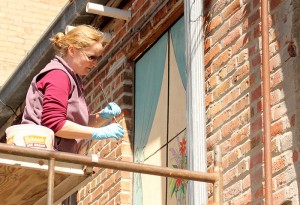 Susanne Crane, one of the organizers of the Freeborn County Arts Initiative, paints a mural over a boarded up window on the back side of Addie’s Floral & Gifts Monday afternoon. — Sarah Stultz/Albert Lea Tribune

Picking up trash, removing graffiti and painting walls along the alley that runs from William to Main streets halfway between Broadway and Washington Avenue, the group aimed to beautify the alley, which has become a primary access for people on the block during the downtown construction.

“It really needed a facelift,” said Susanne Crane, an artist and organizer who owns the historic Bessesen Building. “We’ve been working on our building all summer, but ours is just part of a bigger picture that needed some serious attention.”

Lon Pogones, building manager of the Bessesen Building, said he was pleased with the efforts and hopes the improvements will inspire greater respect for the alley going forward. 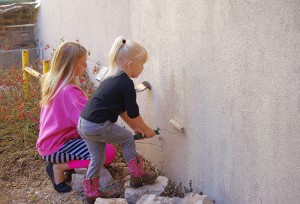 Sisters Ramsey, right, and Riley Rae Shaw paint over graffiti on the back of the old Farm Bureau building on Saturday. — Photo courtesy Julie Bronson

The alley is a common thoroughfare for people walking to and from The Nasty Habit and Aragon bars, and lots of glass and graffiti were found on some of the back walls.

“Some of our neighbors put in new lights and upgraded their back doors and back steps,” Pogones said. “It’s been a group effort.” 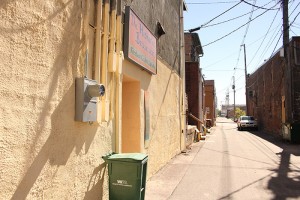 The back side of the historic Bessesen building was one of a few painted Saturday in an effort by the Freeborn County Arts Initiative to clean up a downtown alley. — Sarah Stultz/Albert Lea Tribune

Crane, who helped form the organization, said artists hoped to start something with broad public appeal that would interest almost everyone.

Crane organized an art mural project more than five years ago where children painted 18 murals to be placed in downtown buildings. 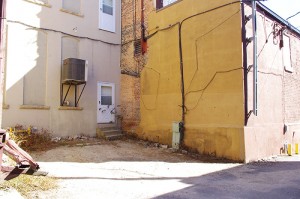 Volunteers on Saturday removed graffiti on the back side of the former St. Paul Clothing and Farm Bureau buildings. — Photo courtesy Julie Bronson