‘Go to the next level’ 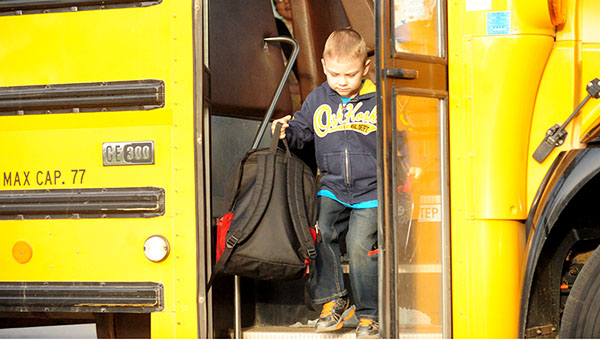 Kale Flugum gets off the bus at Southwest Middle School this morning. Flugum was headed for Sibley Elementary School for the first day of school. –Brandi Hagen/Albert Lea Tribune

The 2013-14 school year is starting with cooler temperatures following the heat and humidity of late August. 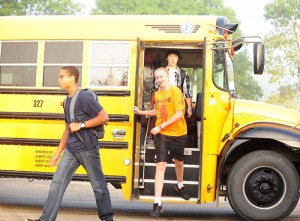 “Even in my 18th year teaching I still have that nervous excitement; it’s cool to have a job like that,” Greenfield said. “We have some new teaching strategies and new curriculum with very engaging activities for students.”

Greenfield said they spent a large part of the last school year researching different curriculum, and she’s looking forward to the changes.

Superintendent Mike Funk said staff are ready to start the school year and work toward the district’s goals of increasing opportunity and achievement for students.

“We’ve got a lot of great initiatives going on in the schools,” Funk said.

Meet the new principal at Southwest

Kovach, 44, was hired this summer to replace Jean Jordan, who became director of educational services in the Northeast Metro Intermediate School District.

He lives in Northfield and has spent the last 20 years working for Lakeville Area Public Schools. For the last five years he was an assistant principal at Kenwood Trail Middle School in Lakeville. Before the assistant principal position he worked for the whole district as an administrator in curriculum development, which included planning and training new teachers. Prior to that he taught economics and sociology at the high school level. Kovach said he’s looking forward to leading Southwest. 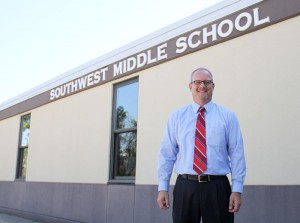 New Principal Steve Kovach poses for a photo outside Southwest Middle School. Kovach lives in Northfield and most recently worked for the school district in Lakeville. –Kelli Lageson/Albert Lea Tribune

“This is one of those awesome doors that has opened,” Kovach said.

“The one thing I appreciate most about him is that he’s a sincere guy,” Funk said. “He’s going to relate well to staff and students.”

Kovach is married to Linda who teaches middle school grades in Northfield, and they have two children. Their son, Alex, is a high school freshman who enjoys football and basketball. Their daughter, Leah, is a sixth-grader. The family’s dog is a Lhasa bichon named Jax. Kovach enjoys being outdoors and hunting ducks, geese and pheasants.

He received a bachelor’s degree in 1991 from Mankato State University. His major was social studies teaching, and his minor was in psychology. He then got a master’s degree in education from St. Mary’s University in 1995. He then attended the University of St. Thomas for an education specialist degree and administrative licensure. Working at middle schools in Lakeville presented Kovach with many different challenges.

“There were a lot of issues,” Kovach said. “It was a great learning experience.”

The toughest issues were helping students and families with home problems. He said there were times when it felt like he couldn’t help the students because situations were out of his control. There were other times when he could help families find counseling or solutions to problems, and those times made it all worth it. Kovach also found that building relationships with staff can make a whole school work more smoothly.

“The biggest thing I brought here is making sure you’re building those relationships,” Kovach said.

Kovach said after meeting with the staff last week he can already tell it’s a close-knit building, and he said it is a testament to Jordan’s leadership before him.

“I want to continue that and go to the next level,” Kovach said.

Kovach said school and district administrative staff have already been helpful in his first few weeks. Some of his goals are to continue to try to raise test scores, but he doesn’t want to rely on just state standardized tests alone. He wants to have standards and assessments from teachers that are always in place, with the hope that a by-product of that will be higher test scores on statewide tests. He also wants to work toward the district goal of raising math, reading and science proficiency.