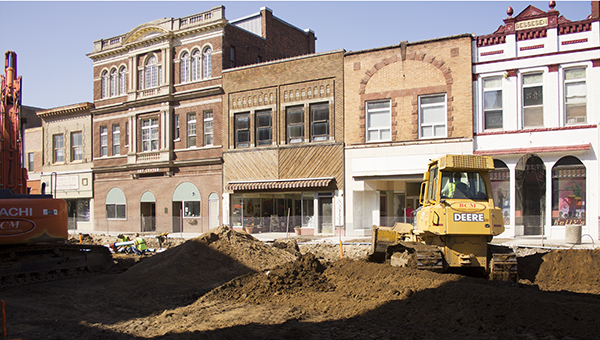 Construction crews work Friday on the reconstruction of Broadway between William and Main streets. Street and sidewalk reconstruction is slated to be completed by the beginning or middle of October. — Sarah Stultz/Albert Lea Tribune

Project scheduled for completion in Oct.

Broadway, from William Street to Clark Street, reopened to traffic on Friday, as construction crews continue work on the underground utilities north of Main Street. 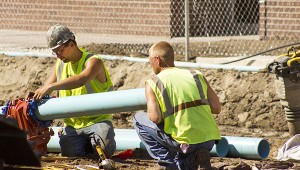 Albert Lea City Engineer Steven Jahnke said a majority of the more than $4 million Broadway reconstruction — namely the street and sidewalk — is scheduled to be completed by the beginning or middle of October. Installation of amenities such as street lights, trees, benches and planters will follow.

Jahnke said the North Broadway parking lot reconstruction is slated to begin Sept. 23, and the reconstruction of Fountain Lake Park, to include a plaza, stairs and terraced seating, is scheduled for completion by the end of October.

“The people who I’ve been talking to have been really positive about it,” Jahnke said. “It’s been going pretty well.”

Street and sidewalk work has already been completed on Broadway from Fountain Street to William Street.

A construction update sent out at the end of last week said a portion of the sidewalk between William Street and Main Street has been removed, and approximately 10 feet of the existing sidewalk will remain open for several more weeks until construction of the new sidewalk begins. 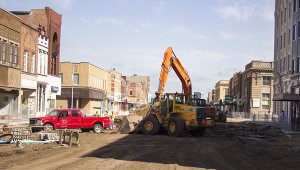 Jahnke encouraged people to support the downtown businesses during the remainder of the construction, as access to some may still be affected.

Albert Lea police will continue to enforce the two-hour parking limit for all on-street parking in the downtown areas, including the portions of Broadway that have been opened, the construction update states.

For weekly construction updates, visit the project website at www.bolton-menk.com/albertlea, or call the city engineer’s office at 377-4325.

Construction meetings are also held every Wednesday morning at 9 a.m. in the Freeborn National Bank Building.