Finding strategies for the future.

That’s what Riverland Community College has been tasked to come up with by the Minnesota State Colleges and Universities System. And asking community members is a big part of those strategic plans, which was why Riverland leaders were in Albert Lea on Wednesday. 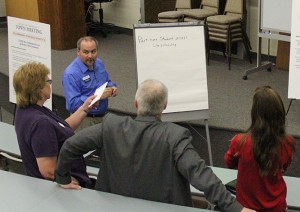 The event was called a president’s town meeting, and new Riverland President Adenuga Atewologun told the crowd of about 30 people that he wanted the community’s input on what Riverland should work on in the next three to six years.

“We’ve got challenges,” Atewologun said. “We also have many good stories.”

Some of the many challenges he listed were funding shifts affecting students’ ability to pay for schooling, employers asking the school to show competency and a declining number of high school graduates. Some successes were also shared, for example many of Riverland’s graduates stay in Minnesota and that community members are involved and committed to Riverland in all three communities, Albert Lea, Austin and Owatonna.

“We need to tell our story better,” Atewologun said. “We are a great institution.” 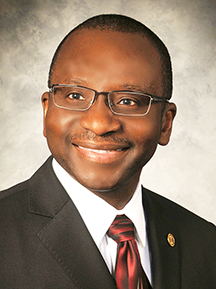 Atewologun said the entire MnSCU system is looking at strategic plans as part of the Charting the Future project. He hosted town hall meetings in Albert Lea and Owatonna on Wednesday, and plans to hold one in Austin later this month to get community input on those strategic plans. Then a report is due to MnSCU by November. All of Riverland’s findings will be posted at www.riverland.edu/town.

Atewologun said there were three main things Riverland needs to do. The first is to create what a strategic plan for the next three to six years at Riverland should look like, another is look at how Riverland can build centers of excellence at all three campuses and the third is to put that all in a report for MnSCU. All colleges and universities in MnSCU have to create these plans this year, Atewologun said. And though he’s looking to the future, Atewologun said administrators aren’t forgetting about the basics like student success, analyzing data and other present tasks.

Those in attendance were asked to split into six small groups and visit stations around the room that had different strategic priorities. They were then asked to discuss those priorities and how they relate to Albert Lea and to find potential solutions.

A common theme participants brought up was that Riverland should work to collaborate with the community, with businesses and industry and with other schools in Albert Lea.

“We should be an incubator for new ways of drawing in businesses or product,” Riverland instructor Steve Vietor said.

More than one small group said that Riverland needs to amp up efforts to partner with the Albert Lea School District. Some ways were to make it easier for instructors to teach at both the high school and college level, to look at sharing services like electricity or snow plowing or buying things in bulk together. Albert Lea school board member Julie Johnson attended the event and said the ideas that were brought up were exciting.

“We are enthusiastic about a stronger partnership with Riverland,” Johnson said. “It helps students be successful and helps employers find better employees — I think it’s great.”

Many other possible ideas were brought up including: having more one-year programs at Riverland, partnering with businesses to have training programs that local business and industry need, learning to compete better with online schools and finding ways to accommodate part-time students, among others.

Community members who were not able to get to the town meeting on Wednesday are invited to share their ideas about Riverland’s priorities by going to www.riverland.edu/town and navigating to Albert Lea.