Lunging for the goal line 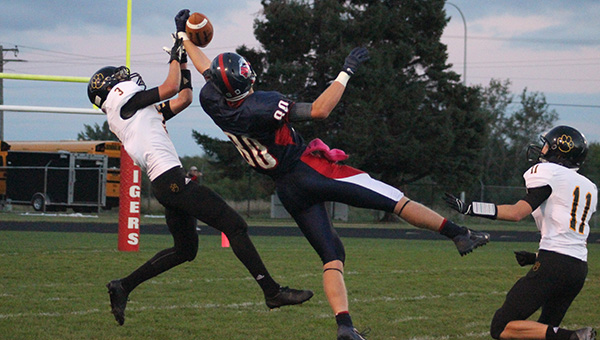 The Albert Lea Tigers were so close and yet so far away, from clinching their first win of the season on Homecoming.

Albert Lea fell 12-6 to Mankato East in a gritty game on a chilly Friday night. 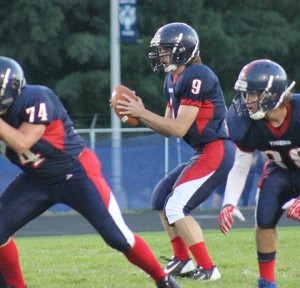 For the most part, the score stayed knotted at six. Both teams would put together drives with potential, but they would always fizzle out.

The game changed from bland to exciting with less than 30 seconds left.

Mankato East took a 12-6 lead with 22 seconds left in the game on a 5-yard quarterback keeper.

The Cougars’ go ahead touchdown was a result of an Albert Lea turnover, one of two on the night for the Tigers. Albert Lea’s defense also had a few costly encroachment penalties that gave Mankato East first downs.

When Albert Lea got the ball back, quarterback Drew Cole scrambled on first down to get the Tigers near midfield with less than 10 seconds to go. Needing a miracle, Triston Westerlund took over at the quarterback position and hurled a 50-yard bomb in the direction of Cody Scherff.

Scherff made the catch, and he lunged toward the end zone but came up a yard short as time expired. 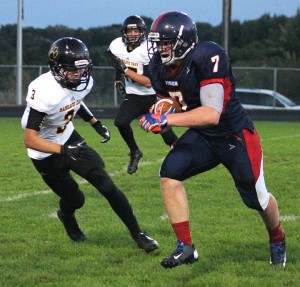 “When it has to come down to the last play of the game, that’s unfortunate,” Jeffrey said. “But in the first three quarters and 11 minutes, we had to be better. We weren’t good enough to win.”

The Mankato East defensive line made a habit of disrupting Albert Lea’s rushing plays all night.

“They were just bringing pressure,” Jeffrey said. “And they hit hard, they controlled the line of scrimmage, and give those guys credit because they played really well.

“Bottom line, we just were not physical enough tonight.”

Jeffrey said he is interested how his team responds next Friday when they travel to Rochester Century. Kickoff is at 7 p.m.

“This is going to sting for a lot of people,” Jeffrey said. “We talked about out there that this is about character now… We’re going to move forward, and we’re going to get better.”