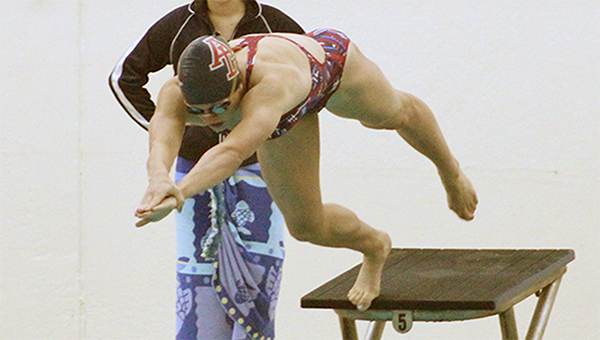 The Albert Lea girls’ swimming team led one of the toughest teams in the Big Nine Conference through the fifth event, but a gritty Rochester Mayo squad took the lead after the 100-yard butterfly and pulled away for the win.

The Tigers fell 93-91 to the Spartans Tuesday night at the Albert Lea High School pool.

Lindsey Horejsi broke yet another pool record during the meet.

“It was a great meet for us,” Albert Lea head coach Jon Schmitz said. “This is the best team in the Big Nine by far, and we had them really worried.” 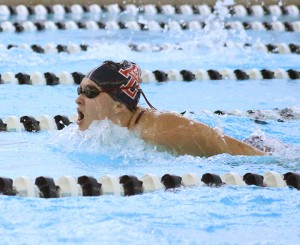 The two teams were close together in terms of score most of the night. Rochester Mayo used a strong 200-yard freestyle relay and 100-yard backstroke race to put distance between it and Albert Lea, a distance the Tigers would not be able to make up.

“They took us out in the 200 free relay,” Schmitz said. “We were kind of sitting on the blocks there. We need to improve our relay starts. We’ll work on

The Tigers got off to a good start when their relay team of Bailey Sandon, Horejsi, Ahnika Jensen and Anna Andersen won the 200-yard medley relay.

“Horejsi swam just an amazing time,” Schmitz said. “They were almost 10 seconds under the pool record, which is incredible.”

The Tigers took first and second in the second to last event of the night, the 100-yard breaststroke, but the 93-79 deficit was too large to be covered in the final race.

Next, the Tigers will next be at Mankato West at 7 p.m. Thursday.

“West is a very excellent squad,” Schmitz said. “Last year, it was really close between the two of us… We can beat them if we have a perfect meet.”