USC school is coming along 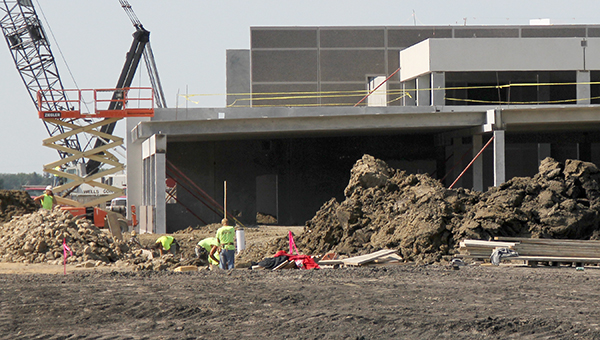 Construction workers are seeing progress at the new school building in Wells. They hope to have the school ready by the start of the 2014-15 school year for United South Central. -Kelli Lageson/Albert Lea Tribune

WELLS — Every day the new building that will house United South Central School District students continues to grow and progress.

A. The approximate location of the main gym at United South Central’s new school building. B. Below this point will be the commons area of the new school building in Wells. C. The school’s auditorium will be here. With a balcony, it will have 600 seats. D. These unfinished exterior walls will be for classrooms in the building. –Kelli Lageson/Albert Lea Tribune

Construction has been steadily increasing since a groundbreaking in May for the new school in Wells. District leaders remain hopeful that it will be open for the start of the 2014-15 school year.

Long periods of rain this summer did hold up some aspects of construction, but Jensen said the construction management firm, Kraus-Anderson, thinks they will be able to make up any lost time.

Work is still being done underground on plumbing and roads, and sport fields are still being crafted. The biggest push right now is to get all the exterior walls, roofing, windows and doors done before snow flies. That way, construction can continue all winter on the interior of the building.

One big change from original plans is to add six classrooms. The original blueprints left space next to the building for additions, but the school board thought finding bids for six extra classrooms couldn’t hurt. A bid came in low enough that they thought they should go ahead and add on those classrooms, Jensen said. 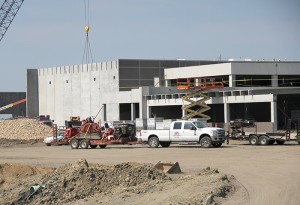 Work continues at the site of the new United South Central school building in Wells. Much of the extrerior walls are finished, and construction managers hope to have the school’s exterior walls, roof, windows and doors installed before snow flies.

Those six extra classrooms will cost a little more than $622,000 and will add 6,700 square feet to the building. Jensen said the money for the additional classrooms will either come from a contingency fund they already have, or they may have to consider not building a bus garage right away. It’s too early now to know if all the contingency funds will be used. The whole project was expected to cost $28 million before the six classrooms were added.

“Our hope is that we’ll be able to find some savings elsewhere,” Jensen said.

Most of the construction bids are completed for the project. The last bids, for surfacing the running track, fencing around ballfields and irrigation, will be decided next week by the school board.

Jensen said unfortunately the construction site is not open to the public because of safety concerns and liability issues. And there are no plans yet for tours, but Jensen is hopeful that students in construction courses could do tours later on in the building process.

What to do with the old building

At its next board meeting on Tuesday, the school board will make a formal request to see if anyone would be interested in buying the old school facility.

“The board will look at the intended use, because they want it to be a benefit for the community,” Jensen said. “They would like to see if there’s any good use before we would demo it.”

Jensen said the board is looking at various artifacts and historical items that may need to be saved or transferred to the new building. Part of the contract with Wells Concrete calls for the company to build something special, but no details are available yet. It may be something for the entrance or something involving signage, but Jensen said the company is working on that.

The school board is working out its plan for what to do with $100,000 that was donated by Bevcomm, an Internet and telecommunications provider. The donation was pledged before the election for the new school, and Jensen said the district has received half the funds already.

“The board wants to do an iPad initiative,” Jensen said.

Because the new school building will have full wireless Internet access, which the current school building does not have, Jensen said it will be helpful to have handheld devices. To have one for each student and staff member the district likely will purchase between 750 and 800 over the course of three years. Jensen said they will wait to see if any new versions of the iPad come out in the near future before they decide which version to buy.

More about the new school

A referendum was held Aug. 14, 2012, and the majority of voters were supportive of a new school. The oldest part of the existing school was built in 1932, with additions in 1933 and 1961. It has a host of plumbing, air quality and size issues. The district has an average of 600 students enrolled each year.

The new school will be 161,700 square feet and is designed by Minneapolis-based architects SGN/Wendel. It will have the capacity for 750 students.

It will be built on almost 67 acres on the south side of Wells on the western side of Minnesota Highway 22. The city of Wells has made easements for 11th Avenue and 6th Street. The building will be at the intersection of those two streets which have yet to be created.

All building contracts are expected to be awarded by the end of May. Then a final construction cost will be available. Right now, the board expects the entire project to cost $28.825 million. Students will attend school in the new building at the start of the 2014-15 school year.

The communities that make up USC are Wells, Easton, Freeborn, Kiester, Bricelyn and Walters.

Exterior walls and roofing on the main gymnasium, the auditorium, the commons area, locker rooms, shop and music area. Dirt streets and pathways created. Preliminary work on sporting fields and the parking lot.

What’s in the near future?

Exterior walls and roofing on all classrooms and the secondary gym are hoped to be installed by mid-October. Then when 80 percent of the windows and doors are installed, they can start pumping concrete in for the floors. Interior walls can be put up as soon as the concrete dries.