Woman walks 2,000 miles and will visit Albert Lea on Saturday 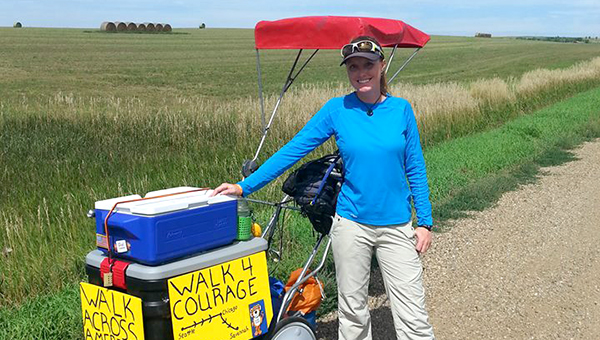 Stacie Eichinger stands with the three-wheeled cart she has been walking across America with. Eichinger’s Walk 4 Courage is bringing her to Albert Lea on Saturday. –Submitted

Eichinger started walking from Ocean Shores, Wash., on May 8 and on Saturday she will arrive in Albert Lea.

Eichinger is walking across America for Beads of Courage, a charity that provides arts-in-medicine supportive care for children with serious illnesses, while pushing a 100-pound cart that carries her gear. She averages 20 to 25 miles a day and usually walks for six days and takes one day off.

She has slept at RV parks, fire stations, hotels or motels, with people she has met along the way and even camped on the side of a road.

“I never know where I’m going to stay,” Eichinger said. “I don’t even know which direction I’m going to go when I leave Albert Lea.”

Wearing through four pairs of shoes and going on to five, Eichinger has walked through everything from 33-degree weather and snow to 102-degree weather, rain and two thunderstorms.

According to Eichinger the three-wheeled cart that she pushes, which she has nicknamed her Bead-M-W, holds everything she could ever need.

The cart has a cooler and stove and is packed with a tent, sleeping bag, pillow, one outfit for the day she doesn’t walk, one set of pajamas, two shirts for walking and one pair of pants for walking.

About Beads of Courage

Beads of Courage was developed by Jean Baruch in February 2003. The charity is based out of Tucson, Ariz., with programs in more than 60 children’s hospitals in the United States, New Zealand and Japan. Each child in the program is given a piece of string and beads that spell out their first name. As they hit different treatment milestones, they are given a color coded bead to add to their Beads of Courage collection.

“They can tell their entire story through beads,” Einchinger said.

Giving a child a color coded bead is similar to a child receiving a gold star in school for an achievement.

“To see what the power of something so small can have on your morale is pretty impressive,” Einchinger said.

There are other beads, too, that often times are given as gifts. Like, for example, Eichinger said there is a turtle-shaped bead.

The turtle, Eichinger said, stands for “no matter where you are in your journey, you are home when you’re a turtle.”

Ironically, Eichinger also calls Tucson home. Prior to her trip, she worked at a garden center where Baruch, who was friends with the owner, had moved into an office space about five years ago.

Eichinger and Baruch met and Eichinger’s involvement in the program took off.

“I realized you can never have too many volunteers,” she said.

Fueled by a dream she had since she was 17 years old to travel like in Peter Jenkins book, “Walk Across America,” Eichinger decided it was time.

“I told myself it was now or never,” Eichinger said. “I decided to do it.”

Eichinger said because she worked in a physically demanding environment about 50 hours a week and worked out at a gym three days a week she was physically ready for the challenge.

She decided she would take a northern route on her trip because she had never been to the Pacific Northwest or the Midwest. Then, she made a more detailed route to visit the hospitals who have the Beads of Courage program.

So far in the first half of her trip she has raised about $16,000 and visited a hospital in Washington, Montana and at the University of Minnesota. The next hospital she plans to visit is Mayo Clinic in Rochester. She hopes to be there sometime next week.

When she gets to the hospitals, Eichinger spends time with the children who are healthy enough to leave their rooms. She visits with them and makes a project provided by Beads of Courage like a bracelet or a necklace.

“When I have my bad days, I think about the kids and families I’ve met and know my situation is really not that bad,” Eichinger said. “Some of these kids go through things that some of us never have to experience and they are always positive.”

Eichinger said she always tries to give the kids the message that they can do whatever they want to do in life.

“I had the dream of doing this 12 years ago and it happened,” Eichinger said. “It’s not because I wished for it to happen. It’s because I worked my butt off to make it come true.”

While she’s walking, Eichinger carries beads that are in the shape of a shoe that she hands out to the children she meets. For every $10 donation Eichinger receives, it sponsors one mile of her walk. Her goal is to sponsor every mile that she walks.

Eichinger hopes to finish her trip by sometime in February. Her end location will be in Savannah, Ga., where her brother lives.

To donate to the cause or read about Eichinger’s trip, visit her blog at www.walk4courage.com. She also has a Facebook page that can be found by searching Walk 4 Courage. All donations made to Beads of Courage are tax-deductible.