Lost in the rain and fog 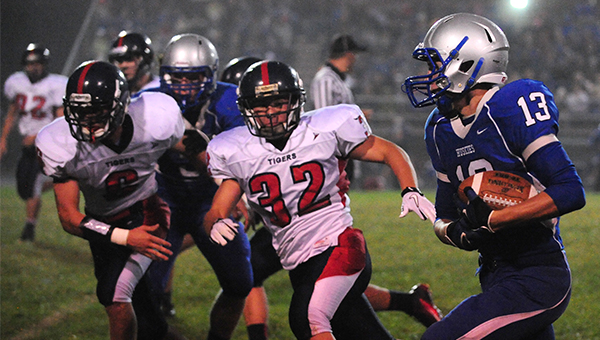 No. 1 Owatonna takes down Albert Lea in game that lasts less than 6 minutes

OWATONNA — Lightning struck in more than one way on Friday when the Albert Lea football team traveled to Owatonna to play the No. 1 team in Class 5A on its Homecoming. 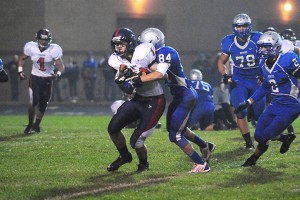 Chris Enderson of Albert Lea makes a catch on a pass from quarterback Drew Cole Friday at Owatonna. The Tigers have two more chances to get a win during the regular season. — Micah Bader/Albert Lea Tribune

In the five minutes and 53 seconds that the game lasted, the Huskies lit up the scoreboard on every offensive series and on special teams against a Tigers squad depleted with injuries.

On the first play from scrimmage, the Huskies scored on a 67-yard scamper by Aaron Peterson through the rain and fog. On Albert Lea’s first drive, the Tigers went backward before a punt was blocked, resulting in a safety. The ensuing kickoff was returned by the Huskies to Albert Lea’s 15-yard line, and on the next play Owatonna’s Peterson found the end zone again. With less than three minutes off the clock, the scoreboard read 16-0.

The game couldn’t possibly go worse for the Tigers or better for the Huskies.

With six minutes and seven seconds remaining in the first quarter, after Owatonna scored on its next offensive series, lightning was spotted southeast of the field and the game was delayed. 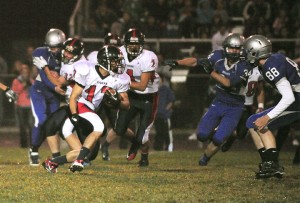 Players jogged to the locker rooms and fans scurried to their vehicles. Knowing that inclement weather was forecast for Friday, the Minnesota High School League sent an email with instructions.

According to the MSHSL’s policy on lightning and threatening weather, a “30-minute waiting period is recommended” before returning to the field after a confirmed lighting strike. The waiting-period clock was re-set multiple times because of sporadic lighting strikes, and the game was ended.

“Eventually, we looked at the radar, and it wasn’t going to be conducive to anyone to get back on the field,” Jeffrey said. “We had a choice to call the game the way it was.”

Another option outlined by the MSHSL and sent to Albert Lea athletic director, Chris Chalmers, included shortening the quarters. Either way, no minimum amount of time would have to be played, and the game would not be recorded as a forfeit.

Albert Lea was playing without starting running back Bany Chan, two-time All-Conference tight end Cody Scherff and Hunter Hoyne, who was out with a kidney bruise.

“Hopefully we can get some guys back,” Jeffrey said. “Cody’s on his first day without crutches, and if he plays we’ll be fortunate.”

“We can get this thing turned around,” Jeffrey said.

Against Austin, attendees will be able to donate to cancer research.