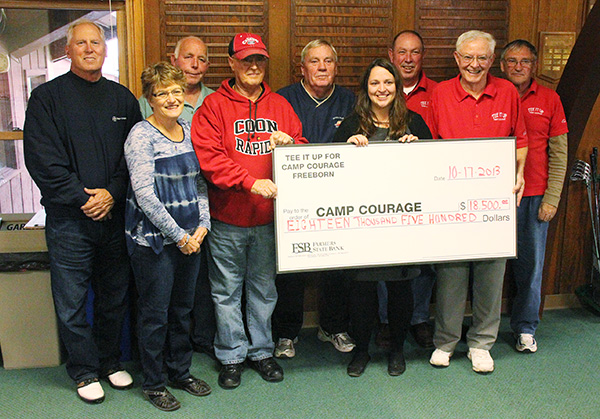 FREEBORN — A check passing on Thursday evening at Oak View Golf Course was no ordinary check passing. It was 50 years in the making.

Members of FFA chapters across the state pick up leftover corn cobs after harvests and sell the kernels to grain elevators with proceeds going to send children with disabilities to summer camp. The tradition began at Freeborn High School in 1953.

That year, a severe thunderstorm knocked over corn stalks and damaged the fall harvest. The FFa chapter donated the funds to a cause and began a tradition that before long raised funds for Camp Courage. The idea spread to other FFA chapters, and it has become common throughout the state, especially in corn-growing southern Minnesota.

Thursday was a big day for Camp Courage, too. The nonprofit organization changed its name to True Friends in the wake of a merger between it and the nonprofit Friendship Volunteers, said developmental specialist Cathy Braaten, who was on hand to appear in a picture with an oversize check and accept an actual check. Camp Courage and its array of camps served children with physical disabilities such as multiple sclerosis or being deaf or blind. Friendship Volunteers served children with mental disabilities such as autism and Down syndrome.

“Now we serve anyone with a disability,” she said.

Freeborn High School closed 14 years ago, so for the past 13 years a 12-person committee has continued the tradition, said retired Freeborn teacher Neil Pierce. The major source of funds is annual golf outing in July, with about 150 sponsors. It is called Tee It Up for Camp Courage. The committee sent 15 children to camps now run by True Friends.

There were 12 campers from Freeborn County at the camps this year, Braaten said.