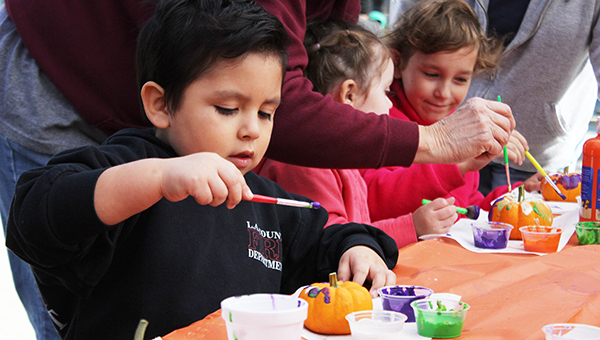 Marley Lugo, 4, focuses as he paints a pumpkin Saturday at Celebrate Albert Lea on Broadway. The event was set up to celebrate the near-completion of the Broadway reconstruction. –Sarah Stultz/Albert Lea Tribune

Set up on portions of the reconstructed street, Celebrate Albert Lea kicked off in the morning with the Color Dash, a 5-kilometer fun run, and ended that night with a street dance between William and Clark streets.

Some of the other activities taking place were face painting, pumpkin painting and an obstacle course for children, along with food demonstrations, sidewalk sales and entertainment for adults.

“This is our community,” said Albert Lea Mayor Vern Rasmussen during a dedication ceremony for the street. “This is our downtown area. Let’s seize the moment.”

As people took part in the festivities, they got the chance to look at all of the work that has been completed.

Thus far, crews have reconstructed Broadway, the sidewalks around it and the underground utilities between Fountain and William streets, and installed new amenities, such as benches and flower pots.

Albert Lea City Manager Chad Adams said the last stretch of the road, from Main Street to William Street should be completed in the next week or two, along with the pedestrian plaza at William Street.

In mid-November, the street lights should be installed, and the reconstruction of Fountain Lake Park at the north end of Broadway should be completed.

The cost of the entire project, which was initiated because of failing underground infrastructure, is more than $4.5 million.

“I think it’s nice they’re doing this,” said resident Mark Goskeson, who came with his wife, Kelly, and their two girls. “Growing up, we used to go to things downtown. It’s fun to bring our kids down here.”

Darlene Schneider, who attended the festivities with her husband, Mel, echoed the same sentiment.

“I think it’s quite wonderful,” she said.

Schneider noted when she first heard about the Broadway project, she questioned parts of it.

Rasmussen said the project has been in the planning stages for the last five years, and he thanked the people in the community who gave their input.

“This project has transformed from one thing to another,” he said.

During the dedication ceremony, he encouraged the community to embrace the downtown. He said he thinks the feeling of renovation and renewal can be contagious.

As the road work has been taking place this summer, at least five downtown business owners have remodeled their storefronts, and he hopes more will do so in the future. This will in turn attract people and businesses downtown, he said.

“I think we’re seeing more energy now,” Rasmussen said. “I think this is going to be something the community can really embrace and take to future generations.”

Adams said the downtown project attracted him to come to Albert Lea.

He talked of all the partnerships that took place to bring the project to fruition, including with the contractors, businesses owners, residents, the Shell Rock River Watershed District and the Albert Lea-Freeborn County Chamber of Commerce.

“It’s contagious,” Rasmussen said. “That feeling of being a part of something is contagious.”

Later that evening, swing dancing was scheduled to take place near the William Street plaza, and Chris Brooks & the Silver City Boys performed. 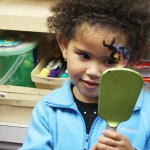 Lily Johnson, 3, looks in a mirror at her freshly painted face inside the Albert Lea Art Center on Saturday. 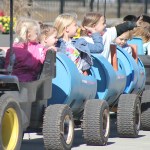 Children wave to family members Saturday as they ride in a train during the festivities on Broadway. 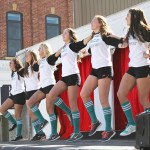 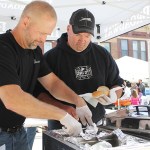 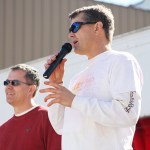 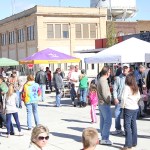 People flocked to Broadway Saturday afternoon as part of Celebrate Albert Lea. There were several opportunities for families including face painting, pumpkin painting, an obstacle course and a train ride. 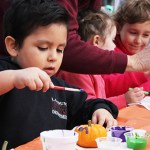 Marley Lugo, 4, focuses as he paints a pumpkin Saturday at Celebrate Albert Lea on Broadway. The event was set up to celebrate the near-completion of the Broadway reconstruction. –Sarah Stultz/Albert Lea Tribune