“Everything is nearly copacetic. I’m still trying to watch every night football on TV. Watching football is a job. Still Bill told me he wants to lose a pound. He wants to get back to his high school graduation weight. He took up two desks in class. Still Bill wouldn’t call himself lazy. He’s too lazy to do that. The only thing he does quickly is to get tired. His body is a temple suffering from poor architecture.” 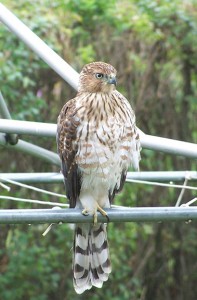 “You know, they make exercise equipment for guys like you and Still Bill,” I say.

“I know, but why? I do go bowling. I bowl with a friend named Lola. She doesn’t have a degree in bowling. She’s a bad bowler. Her goals are always the same — to break into double figures without breaking a nail. She throws a gutter ball and a backup ball that comes to a complete stop in the middle of an alley. I’m taking Pop trick-or-treating, but he might be getting too old. When the door opens, he yells, “Trick or…” and he can’t remember the rest. He asks for high-fiber candy and then has to ask someone to chew it for him. When someone drops a candy bar into his bag, Pop loses his balance and falls over.”

Yellow-rumped warblers moved through the trees and shrubs, gleaning any food available, including poison ivy berries. “Butterbutts,” I whispered with a smile as I heard their sluggish chips.

I stood at the end of my drive watching birds in passage. Broad-winged hawks flew high, nearly unavailable to the naked eye. At the Veracruz (Mexico) Hawkwatch more than 100,000 hawks per day may pass through between Sept. 20 and Oct. 25. During the first two weeks, almost all of the river of raptors are broad-winged hawks.

Starlings and blackbirds glided smoothly over the cornfields. A Cooper’s hawk flew not far over my head. It moved quickly as if it had an appointment to keep. Perhaps it did.

This from “Wicked Bugs” by Amy Stewart, “When driver ants are hungry, they hit the road. In leaderless swarms, they stream through villages in central and east Africa, decimating everything in their path. As many as 20 million ants join the swarm, enough to build tunnels as they go and overpower grasshoppers, worms, beetles and even larger creatures like snakes and rats. Because these inch-long ants barrel right through villages and homes, people may be forced to move out during the onslaught. This is not always such a bad thing; the ants wipe out cockroaches, scorpions and other household pests during their march.”

Harlan Lutteke of Alden asked about silken tents in trees. The most common are made by the eastern tent caterpillar and the fall webworm. Don’t mistake them for the gypsy moth, which doesn’t spin a web. An eastern tent caterpillar has a black, hairy appearance with white stripes running down its back. The adults are brown moths with two white stripes across the forewings. The eastern tent caterpillar overwinters in an egg mass encircling a small twig. Each brown, oval-shaped mass contains up to 300 eggs. When leaves appear in spring, the eggs hatch and the larvae spin protective tents. Colonies remain in tents at night and on cloudy, rainy days, emerging on sunny days to feed. By the end of May, the caterpillars leave the tree to form cocoons. By late June, adults emerge and lay eggs on host plants. Producing one generation per year, the eggs don’t hatch until spring. Trees in the rose family, such as apple, cherry, crabapple and plum, are the primary hosts, but other fruit and ornamental deciduous trees can be attacked. As caterpillars leave the tent to feed on new leaves, a strand follows them and enlarges the tent. An infestation of eastern tent caterpillars is capable of defoliating a tree. New leaves typically emerge later, but total defoliation could weaken a tree and make it susceptible to other insects and diseases. The fall webworm differs from the tent caterpillar by the time of year it’s seen, its feeding habits and tent placement. In its larval state, the fall webworm is usually pale yellowish-green with a dusky stripe down its back and a yellow stripe on each side. They are covered with long, gray hairs arising in tufts. Adults appear from May to August and deposit egg masses of up to 1,500 eggs on leaves of host trees. Larvae spin webs over the leaves on which they feed, enlarging them to cover more foliage as needed. The larvae drop to the ground to spin cocoons in the soil where they overwinter until spring, emerging as moths. Many species of deciduous trees host fall webworms, with birch, chokecherry, crabapple, maple, mulberry, walnut and willow being most susceptible. Damage occurs in late July and August, more of a cosmetic problem than a health threat.

“Do blue jays migrate?” Some do and some don’t, but their migration is unpredictable. A jay that remained here last winter might migrate this year. The size of an acorn crop might influence their travel. Blue jays store acorns.

Watch for deer especially at dawn and after sunset. About 20 percent of crashes occur in early morning, with more than half occurring between 5 p.m. and midnight.

Craig Rayman of Glenville told me that his grandfather said, “Rain before seven, clear by 11.”

Monarch butterflies use a “clock” in their antennae to help travel to Mexico. The insects navigate according to the position of the sun. You can tell the male monarchs from the females. Look for a dark spot on each of the male’s hind wings. A monarch butterfly weighs about half a gram or 0.017637 ounces on average. In comparison, a new penny weighs 2.5 grams or 0.0881849 ounces.

“We are supposed to forgive everyone; everyone includes ourselves.” — Denis Waitley

A soup and pie supper is planned at Cross of Glory Lutheran Church in Hartland from 4:30 to 7 p.m. Nov. 6.